WASHINGTON - United States President Donald Trump’s declaration of a national emergency to unlock funds for his border wall was challenged in court within hours by three Texas landowners and an environmental group, the first of several lawsuits expected as civil rights groups and Democrats vowed to mount legal and legislative challenges against what they called an act of presidential overreach.

The landowners, who had been informed that the government intended to build a wall on their property, said their privacy and quiet enjoyment of their land would be affected while the nature group said wall construction would destroy habitats and impair wildlife observation, according to the lawsuit filed on their behalf by consumer rights group Public Citizen.

The American Civil Liberties Union and the state of California also vowed to fight Mr Trump’s emergency declaration, and attorneys-general in Colorado, Nevada, New Mexico and New York are expected to mount legal challenges as well against Mr Trump’s efforts to bypass Congress.

“If the President tries to use a made-up emergency to pay for his border wall, then California will see him in court,” said a joint statement from California governor Gavin Newsom and attorney-general Xavier Becerra, both Democrats.

Mr Trump said on Friday (Feb 15) that he was confident his emergency declaration to unlock funds for his border wall would stand up in the Supreme Court, justifying the move as a matter of national security needed to secure the US-Mexico border against what he called “an invasion of drugs... of gangs”.

He acknowledged that he might lose in the lower courts but was hopeful that his policy would be upheld by the Supreme Court, a process his administration went through last year (2018) over its travel ban targeting people from several Muslim-majority countries.

The emergency declaration was the first step to securing up to US$3.6 billion (S$4.8 billion) reallocated from military construction projects, after Congress granted the President US$1.375 billion for 90km of fencing, only a quarter of the US$5.7 billion he had asked for.

“This is plainly a power grab by a disappointed President, who has gone outside the bounds of the law to try to get what he failed to achieve in the constitutional legislative process,” they said on Friday.

“The Congress will defend our constitutional authorities in the Congress, in the Courts, and in the public, using every remedy available,” they added.

The White House defended the legality of the move, which acting chief of staff Mick Mulvaney told reporters was due to Congress “being simply incapable of providing the amount of money necessary, in the President’s eyes, to address the current situation at the border”. 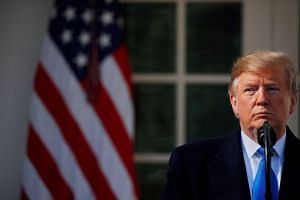 Office of Management and Budget acting director Russell Vought said it was common authority to be able to declare a national emergency and presidents had done so 58 times since the National Emergencies Act was enacted in 1976.

Constitutional law experts however argued that Mr Trump’s declaration this time was a fairly unprecedented use of that authority.

Georgetown University law professor Mary McCord, who was acting assistant attorney-general for national security from 2016 to 2017, said that many emergency declarations were responses to crises in other countries and generally had to do with blocking property, access to funds, and prohibiting financial transactions with designated persons or entities who presented threats to the US due to terrorism, espionage and other matters.

“That doesn’t seem to exist at all with respect to this declaration of national emergency,” she told reporters in a briefing call organised by the American Constitution Society.

Ohio State University law professor Peter Shane, who specialises in separation of powers, said that national emergencies typically resulted in immediate responses, adding that he could think of no other case in which the President declared a national emergency only for other agencies to engage a multi-year construction project to respond to an exigency.

Another point of contention was that Mr Trump’s move was an explicit response to congressional unwillingness to provide him with the authority he sought and not in line with the intention of the lawmakers who passed the National Emergencies Act, said Prof Shane.

“They weren’t thinking that the President could basically shift money around to keep a campaign promise just because Congress refused to appropriate money for that purpose,” he added.

A senior administration official told reporters in a background briefing call that national emergencies had twice before involved moving money around.

Reporter to Trump: 'What do you base your facts on?'
Newsom to Trump: 'See you in court'

One avenue of legal challenge could centre on the constitutional separation of powers, which explicitly vests in Congress the power of the purse, said the law professors.

Another avenue could be the requirement that funds appropriated from military construction projects must be necessary to support the use of the armed forces, said Prof McCord, who represents a Texas church in a case against the federal government over border wall construction on its land.

“The President has so far suggested what he intends to use this money for...would not be in support of the use of the armed forces, instead using military money in support of his political agenda to build the wall,” said Prof McCord.

Meanwhile, the Democrat-controlled House Judiciary Committee announced that it was launching an investigation into the emergency declaration and requested legal documents and officials involved in the decision to be made available for a hearing in the coming days.

The Democrats are also working to pass a resolution in the House to block the national emergency, which Congressman Alexandria Ocasio-Cortez confirmed on Friday she would work with fellow Democrat Julian Castro to introduce.

Mr Trump can veto the resolution if it is not passed by two-thirds of both chambers, but it would be the first veto of his time in office.