WASHINGTON (WASHINGTON POST) - The White House has begun laying the groundwork for a declaration of national emergency to build President Donald Trump's border wall, including searching for unused money in the Army Corps of Engineers budget, two people with knowledge of the preparations said on Thursday (Jan 10).

Such a declaration would be certain to set off a firestorm of opposition and would undoubtedly be challenged in court, lawmakers of both parties said.

But with the partial government shutdown nearing its third week, a national emergency declaration could be a way out of the impasse. It could allow Mr Trump to cite action on his long-promised Mexico border wall even without Congress granting his funding demands - and potentially pave the way for the government to reopen.

Mr Trump has urged the Army Corps to determine how fast contracts could be signed and whether construction could begin within 45 days, according to one of the people with knowledge of the preparations, who spoke on condition of anonymity to describe them.

The administration is specifically eyeing a disaster-spending Bill passed by Congress last year that includes US$13.9 billion (S$18.8 billion) in funding that has been allocated but not actually spent for a variety of civil works projects, according to the second person, a congressional aide who also requested anonymity.

The preparations are taking place as talks hit an impasse over Mr Trump's demands for US$5.7 billion to construct more than 320km of wall along the United States-Mexico border. Democrats are staunchly opposed, leading to a partial government shutdown that would reach the 21-day mark on Friday, making it tied for the longest government shutdown in US history.

Mr Trump reiterated on Thursday that he may declare a national emergency if Democrats don't give him what he wants. 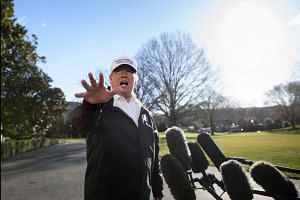 Trump walks out of talks on shutdown, bemoans ‘total waste of time’

'We want our pay!' furloughed US workers shout at White House as govt shutdown continues

A growing number of Americans blame Trump for govt shutdown

"We can declare a national emergency. We shouldn't have to, because this is common sense," Mr Trump told reporters as he visited the border in Texas.

When asked about a timetable for such a declaration, the President said he would see how it goes with Congress.

But on Capitol Hill, there were no signs of progress, and lawmakers of both major parties were bracing for Mr Trump to declare a national emergency. Democrats were exploring their options on how to respond, legally and legislatively.

Democratic staff from leadership offices and relevant committees met on Thursday afternoon to discuss a potential response. According an attendee, the meeting focused on undercutting any case that the border situation constituted a national emergency under the legal definition, and highlighting projects that might be put at risk if Mr Trump were to raid other accounts to fund the wall.

House Democratic leadership staff also have explored the possibility of a lawsuit against the administration, although the current thinking is that Congress likely would not have standing to sue, according to a leadership aide.

State attorneys general or people directly affected by a border wall - such as landowners who own property along the US-Mexico boundary - would likely have to file the lawsuit, and the House could file an amicus brief.

House Speaker Nancy Pelosi declined to say how the House would respond to a national emergency declaration on Thursday.

"If and when the President does that, you'll find out how we will react, but I'm not going to that place now," Ms Pelosi said. "But I think the President will have problems on his own side of the aisle for exploiting the situation in a way that enhances his power."

Indeed, a number of Republicans have expressed qualms or outright opposition about Mr Trump declaring a national emergency, including members of the House Armed Services Committee who fear that the administration could target funds within the Pentagon's military construction budget.

Others cautioned against the administration taking executive action on an issue that should be Congress' purview.

"I understand why many in the administration might think that Nancy Pelosi's just not willing to negotiate and they may feel that's their only option," said Representative Mario Diaz-Balart, R-Fla., a senior member of the House Appropriations Committee. "I'm a legislator. I'm not going to give up trying."

Representative Sean Patrick Maloney, D-N.Y., said, "I hope the President doesn't go down that road. It's a declaration of failure and of weakness on his part. That's what he's declaring, and the fact that it seems appealing is only because he's created such pain that people are understandably looking for any way to move forward because so many Americans are going to hurt starting tomorrow in real ways. It's completely unnecessary, and I'm not prepared to say we need to all give up on what makes sense just because the President's a petulant child."

Mr Maloney, who represents a district Mr Trump won in 2016, said he has felt no pressure to support a wall - even after Mr Trump called on Americans to call their legislators to demand one in a televised address on Tuesday.

In a statement on Thursday, Senator Lindsey Graham, R-S.C., said "it is time for President Trump to use emergency powers to fund the construction of a border wall/barrier".

Representative Mark Meadows, R-N.C., when asked whether he felt Mr Trump declaring a national emergency was inevitable, responded: "Considering how Democrats are not negotiating, yes."