PANAMA CITY BEACH, UNITED STATES (REUTERS) - US President Donald Trump said on Wednesday (May 8) that China "broke the deal" it had reached in trade talks with the United States, and vowed not to back down on imposing new tariffs on Chinese imports unless Beijing "stops cheating our workers".

The US Trade Representative's office announced that tariffs on US$200 billion (S$273 billion) worth of Chinese goods would increase to 25 per cent from 10 per cent at 12.01am on Friday (12.01pm on Friday Singapore time), right in the middle of two days of meetings between Chinese Vice-Premier Liu He and Mr Trump's top trade officials in Washington.

Speaking to supporters at a rally in Florida on Wednesday, Mr Trump accused China of breaking the deal and said that Beijing would pay if no agreement is reached.

"I just announced that we'll increase tariffs on China and we won't back down until China stops cheating our workers and stealing our jobs, and that's what's going to happen, otherwise we don't have to do business with them," Mr Trump told a cheering crowd.

"They broke the deal," he added. "They can't do that. So they'll be paying. If we don't make the deal, nothing wrong with taking in more than US$100 billion a year."

Mr Trump's comments fuelled a round of selling in Asian markets. Beijing has announced it would retaliate if tariffs rise.

At a press conference on Thursday, China's Commerce Ministry said in response to a question on whether Beijing would raise tariffs that the country was prepared to defend its interests.

"China's position is very clear. We oppose the unilateral increase of tariffs, and there is no winner in a trade war. This is not in line with the interests of China, and does not conform to the interests of the US, and is not in line with global interests. It is hoped that the US will work hand in hand with China, solve problems through dialogue rather than unilateral measures, and reach a mutually beneficial and win-win agreement on the basis of mutual respect and equal treatment," said spokesman Gao Feng.

"At the same time, China is well prepared, determined and capable of safeguarding its legitimate rights and interests," he added, pointing out that Mr He's visit to the United States to carry out the eleventh round of trade consultations demonstrated "China's responsible attitude and sincerity in dialogue".

Queried about the outcomes of the previous round of talks and China's expectations from the next round, Mr Gao said China and the US exchanged in-depth views on the text of the agreement and many issues of concern to both sides in the tenth round.

"Both parties agreed to continue to maintain close communication. Regarding the eleventh round, we hope that the two sides can move in the same direction, take care of each other's core concerns, and solve the existing problems with a rational and pragmatic attitude," he said.

When pressed on what specific measures China will take, Mr Gao said: "There have been a lot of news reports from various channels recently. The US has also given several labels: 'backpedalling', 'abandoning' and so on. China has also been said to have 'gone back on its promise' a lot. China emphasises trustworthiness, keeping to one's word. This has never changed."

"For more than a year, our sincerity and goodwill in promoting negotiations have been obvious to all. Negotiation itself is a process of exchanging views, solving problems, and reaching consensus. It is normal for both sides to have different opinion," he added.

"To reach an agreement requires the joint effort of both parties. China has been moving the negotiations along with sincerity and hopes to reach a mutually beneficial and win-win agreement on the basis of equal treatment and mutual respect. We are willing to conduct frank and in-depth exchanges with the US on the differences that exist, and the two sides will work together to solve the existing problems," Mr Gao said in response to a question on whether an agreement would be reached in the new round of talks.

The world's two largest economies have been embroiled in a tit-for-tat tariff war since July 2018 over US demands that the Asian powerhouse adopt policy changes that would, among other things, better protect American intellectual property and make China's market more accessible to US companies. 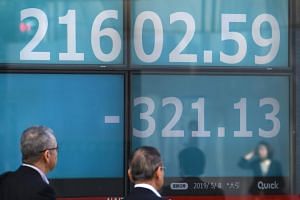 Expectations were recently riding high that a deal could be reached, but a deep rift over the language of the proposed agreement opened up last weekend.

Reuters, citing US government and private-sector sources, reported on Wednesday that China had backtracked on almost all aspects of a draft trade agreement, threatening to blow up the negotiations and prompting Mr Trump to order the tariff increase.

Mr Trump, who has embraced largely protectionist policies as part of his "America First" agenda, warned China on Wednesday that it was mistaken if it hoped to delay a trade deal until a Democrat controlled the White House.

"The reason for the China pullback & attempted renegotiation of the Trade Deal is the sincere HOPE that they will be able to 'negotiate' with Joe Biden or one of the very weak Democrats," Mr Trump, a Republican, tweeted on Wednesday.

"Guess what, that's not going to happen! China has just informed us that they (Vice-Premier) are now coming to the US to make a deal. We'll see, but I am very happy with over US$100 Billion a year in Tariffs filling US coffers," he added.

In response, Mr Biden's deputy campaign manager, Ms Kate Bedingfield, criticised Mr Trump, saying on Twitter that US farmers, small-business owners and consumers were the ones hit by the tariff battle.

US stock indexes rose slightly from this week's earlier losses after her comments, but the S&P 500 and the Nasdaq closed in negative territory amid caution over trade and some disappointing earnings. 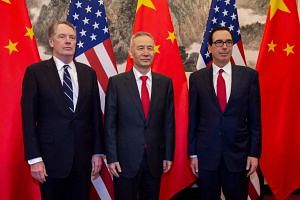 China will fight back if US raises tariffs on imports

Washington is demanding Beijing make sweeping changes to its trade and regulatory practices, including protecting US intellectual property from theft and forced transfers to Chinese firms, curbs on Chinese government subsidies and increased American access to China's markets.

Mr Trump also has sought massive hikes in Chinese purchases of US farm, energy and manufactured products to shrink a gaping US trade deficit with China.

Sources familiar with the talks said China's latest demands for changes to a 150-page document that had been drafted over several months would make it hard to avoid the US tariff hike on Friday. That increase would affect Chinese imports, from computer modems and routers to vacuum cleaners, furniture, lighting and building materials.

Mr Scott Kennedy, a China expert at the Centre for Strategic and International Studies in Washington, said the talks were at a delicate stage and much depended on what sort of proposal Mr Liu is bringing to Washington.

"I think the Trump administration is quite serious about imposing tariffs," Mr Kennedy said. "I don't think Liu He would have agreed to come if he was just going to give the US a lecture."