NEW YORK (NYTIMES) - They sound like the ingredients of a pulpy thriller: Bigamy. Secret religious conversions. A doctorate from a mail-order diploma mill. Affairs with powerful women.

The sordid list - a mixture of facts, accusations and insinuations, packaged in a glossy slide show - represents the crux of a well-orchestrated campaign by Goldman Sachs to discredit one of its former partners and to minimise the Wall Street bank's role in the looting of a big Malaysian investment fund.

In recent presentations to United States regulators and law-enforcement authorities, according to people familiar with their contents, Goldman executives and their lawyers have depicted Tim Leissner, a former top investment banker, as a master con man, someone so sneaky that even the retired military intelligence officers who work for the bank couldn't sniff him out.

The scorched-earth tactics, especially against someone who had been a star banker, reflect just how worried Goldman is about the criminal investigations into its role in the theft of at least US$2.7 billion (S$3.6 billion) from the 1Malaysia Development Berhad, or 1MDB, sovereign wealth fund.

One big reason for concern is that senior Goldman officials, including the bank's chief executive at the time, helped win Malaysian business. And the relationship became a crucial engine of profits for the bank, generating about US$600 million in fees.

The bank's hope is that by casting Leissner as a rogue employee, Goldman will reduce its legal and reputational liability.

On Wednesday (Jan 16), in a sign of how the stakes are rising, Goldman disclosed that in the fourth quarter of 2018 it set aside an additional US$516 million to cover potential legal and regulatory penalties, including those related to 1MDB. And executives said Goldman could owe US$2 billion on top of what it has already put in its reserves. 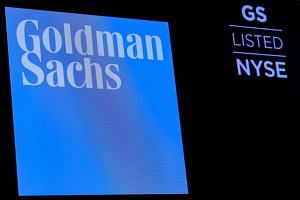 'Does Goldman have a heart?': Malaysia blames Goldman Sachs for 1MDB's stolen billions

"For Leissner's role in that fraud, we apologise to the Malaysian people," Mr David M. Solomon, the bank's chief executive, told analysts Wednesday. "As you would expect, we have looked back and continue to look back to see if there is anything that we as a firm could have done better."

Goldman spokesman Michael DuVally said that since Leissner left the bank in 2016, Goldman found new violations of its internal policies "that we have shared with the Department of Justice and other relevant authorities".

While it is not uncommon for companies to defend themselves by blaming lone employees, Goldman's ad hominem attacks on Leissner stand out for their aggressive, charged nature. The bank has not presented the authorities with proof to substantiate all of its allegations, and some of them - including a focus on Leissner supposedly converting to Islam on two occasions - are, at best, inflammatory.

Leissner, 48, has been criminally charged by US and Malaysian prosecutors with bribery and money laundering in connection with the theft from 1MDB. He pleaded guilty last year to the US charges. He is scheduled to be sentenced in June. His lawyer did not respond to requests for comment for this article.

For years, Leissner was one of Goldman's most powerful dealmakers in Asia. Among other things, he helped Goldman win lucrative assignments selling bonds for 1MDB. He facilitated at least one meeting between Goldman's chief executive at the time, Mr Lloyd C. Blankfein, and a Malaysian financier named Low Taek Jho or Jho Low, who subsequently was charged as the mastermind of the 1MDB theft.

Goldman suspended Leissner in 2016, and the bank's executives have publicly faulted him for lying to Goldman and snaring the bank in the fraud.

But in private meetings with federal and state officials and employees in recent months, Goldman intensified its efforts to blame Leissner, according to five people familiar with the bank's campaign who were not authorised to discuss it publicly.

In November, for example, the bank met federal prosecutors in Washington and delivered a lengthy PowerPoint presentation that sought to paint Leissner as a man practiced in the art of deception, according to two people familiar with the presentation.

One slide in the presentation said that Leissner may have been briefly married to two women at the same time.

Another slide included a photo of Leissner praying with other men, as well as images of a government-issued ID card that showed Leissner describing himself as Muslim. The people familiar with the presentation said Goldman officials used the slide to claim that Leissner twice converted to Islam in order to impress wealthy Muslim women he was dating.

The inch-thick presentation also accused Leissner of having had a sexual relationship with at least one Goldman client and of having received a mail-order PhD from a now-defunct university, the people said.

It isn't clear what evidence Goldman has of the alleged affair, which bank officials believe took place before Leissner married the fashion designer and model Kimora Lee Simmons in 2013.

In addition to the Justice Department, Goldman delivered similar multi-hour presentations to bank regulators, the people said. As well as the section seeking to discredit Leissner, the presentation outlined the vetting Goldman performed before agreeing to sell bonds for 1MDB. It also had a section on Low, including clips from news articles describing him as a promising entrepreneur and investor.

In part, Goldman is using the presentation to argue that, given Leissner's supposed slipperiness, the bank's compliance system should not be faulted for failing to detect his scheme.

The bank also is hoping to dissuade the authorities from relying on any testimony or cooperation Leissner might provide and that could put Goldman in a bad light.

As part of his guilty plea last year, Leissner admitted to misappropriating at least US$50 million from 1MDB's bond offerings and to deceiving Goldman about Low's role in those deals.

But Leissner also told a federal judge that hiding his actions from Goldman's compliance department was "very much in line" with a wider culture at the firm, especially in Asia.

Senior Goldman executives have been spreading the blame-the-rogue-employee message to its partners, according to six people familiar with Goldman's efforts.

In December, Goldman held an annual dinner for retired partners at the Conrad Hotel in Lower Manhattan. Mr Solomon talked about the 1MDB investigation, explaining that Goldman has muscular compliance programmes but would not always be able to protect against ill-intentioned employees, according to five people who were there.

They said they were struck by Mr Solomon's bitter tone.

Goldman's efforts to defend itself by attacking Leissner's behaviour could raise more questions for the bank. Some Goldman executives knew about his alleged romantic relationships with clients, but the bank did not object to them until after Leissner became a target of investigations.

Five current and former Goldman bankers said in interviews that they were aware of Leissner's hard-partying reputation and romantic overtures to wealthy women, including several who were executives at companies that were bank clients.

Mr Joe Ravitch, a former Goldman partner who helped hire Leissner from Lehman Bros in Hong Kong in 1999, said it was common knowledge that Leissner was misbehaving.

"A lot of the people that worked for me would tell me the stories about Tim being a wild man," he said.

In one case, Goldman investigated Leissner's relationship with a top female executive of a Malaysian media company, but the bank ultimately didn't take any action against Leissner, according to a Goldman official.

In Malaysia, where Goldman itself has been criminally charged, prosecutors and senior government officials are unlikely to be receptive to the bank's claim that Leissner was a lone wolf.

"The whole world knows that their senior executives were involved with wrongdoing and don't feel that guilty, so I think there needs to be some accountability," Malaysia's finance minister Lim Guan Eng said on Monday.

"You have to show genuine remorse for what has happened. You must pay the penalty."