HONG KONG (NYTIMES) - Accused of helping to carry out an international multibillion-dollar fraud, Goldman Sachs has tried to pin the blame on a few rogue bankers.

It is an argument that the government of Malaysia, where the fraud was carried out, is not buying.

"We have suffered extremely large losses, and you were the financial adviser," said Lim Guan Eng, the finance minister of Malaysia, referring to Goldman Sachs.

"Now how do you account for that? And don't tell me you don't know where the money went," Lim said in an interview in Hong Kong on Monday (Jan 14).

"Goldman Sachs needs to come to terms with the facts."

Malaysia is gearing up for a fight with an institution that was once synonymous with power and influence around the world. The government is seeking US$7.5 billion (S$10.14 billion) in compensation from Goldman Sachs, adding to a mounting pile of penalties against the bank and deepening one of the most serious crises in its 149-year history.

The crisis is expected to be the main focus for David M. Solomon, Goldman Sachs' recently appointed chief executive, when he announces the bank's fourth-quarter results this week.

Goldman has found itself entangled in civil and criminal investigations around the world related to the work it did in helping 1Malaysia Development Berhad - or 1MDB, which US prosecutors have alleged was a slush fund for the former Malaysian prime minister Najib Razak and other officials.

New York regulators have issued subpoenas to some Goldman bankers, the bank has held talks with prosecutors about possible fines, and most recently, its lawyers in Malaysia reached out to the country's attorney-general.

Last month, Malaysia filed criminal charges against Goldman Sachs, accusing the bank of defrauding investors by raising more than US$6 billion for 1MDB.

Goldman Sachs has denied the charges and said that "certain members of the former Malaysian government and 1MDB lied to Goldman Sachs".

It has said it would "vigorously contest" the charges.

"Under the Malaysian legal process, the firm was not afforded an opportunity to be heard prior to the filing of these charges against certain Goldman Sachs entities, which we intend to vigorously contest," the bank said in an e-mailed statement.

In November, the Justice Department announced that it had secured a guilty plea from one former senior Goldman banker and filed bribery and money laundering charges against a second.

Goldman has since said its dealings with 1MDB could still result in "significant fines, penalties and other sanctions".

In Malaysia, the scandal has gripped the nation and led to the unexpected ouster of Najib, handing power to Mahathir Mohamad, 93, a former prime minister and long-time politician.

At the heart of the scandal is the 1MDB fund, which Najib created in the name of raising money for development projects to benefit Malaysians. Instead, prosecutors have alleged, billions of dollars were siphoned off into the personal accounts of Najib, other officials and a flamboyant Malaysian financier known as Jho Low. 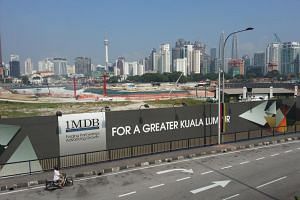 Malaysia examining whether China offered to bail out 1MDB 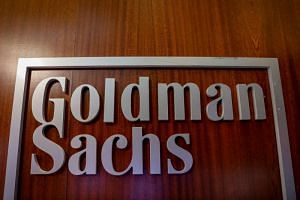 Malaysia seeks S$10b in reparations from Goldman Sachs over 1MDB

Under Mahathir, the new government is trying to recover some of the billions that disappeared and subsequently burned a big hole in the government's finances.

"You look at the agony that Malaysia had to endure - not just in terms of the figures but the trauma," Lim said. "You must have a heart. Sometimes you ask, does Goldman have a heart?"

ECRL fate to be decided in coming weeks

He also said Malaysia would be ready to walk away from an ambitious railway project that started under Najib and was promoted as a showcase deal in China's Belt and Road Initiative. The initiative, an enormous infrastructure plan financed by China, includes countries across Asia, Eastern Europe and Africa.

"All options are on the table," Lim said, adding that a decision would be made in the coming weeks.

Last summer, citing the high costs of the deal, Malaysia halted a contract for the China Communications Construction Co to build an East Coast Rail Link (ECRL), a rail line linking vast swathes of the country.

Representatives from the Chinese side have been negotiating with Malaysian counterparts to revive the deal. Under the current terms, officials in Kuala Lumpur estimate that Malaysia would be making annual interest payments of RM2 billion (S$660 million), a person with direct knowledge of the government's estimates said. The rail, once built, is also expected to lose about US$122 million a year, that person said.

Last week, The Wall Street Journal reported that Chinese officials had offered to help bail Najib out of a growing debt hole related to 1MDB in exchange for stakes in the East Coast Rail Link and a pipeline project.

Chinese officials also offered to get the United States and other countries to drop their early investigations into 1MDB in exchange, the Journal reported, citing documents and the minutes of meetings between Chinese and Malaysian officials.

The China Communications Construction Co did not respond to an e-mailed request for comment.

Lim said the Malaysian government was looking into the allegations.

"For us to be able to initiate any investigation, we need the documents," he said, adding that the government had sought documents from the Journal.

The revelations could add to tensions among Malaysia, the United States and China at a time when Malaysia is hoping to raise money through the bond market and strike new deals. The United States has grown increasingly sceptical of China's One Belt One Road campaign, which it sees as a campaign for political influence overseas.

"You have to look past these instances," he said. "Just like Goldman Sachs is an outlier and doesn't reflect the entire financial industry in the United States, it is similar for this case vis a vis China."