WASHINGTON (AFP) - US President Donald Trump on Monday (Aug 5) tied mass shootings that left 31 dead in two US cities over the weekend to hate, violent video games and mental illness.

But with 255 mass shooting events counted so far this year in the United States, according to the Gun Violence Archive, analysts say those factors don't explain all the violence.

Not all mass shooters show signs of mental health problems, or play violent video games, or have political grudges. But one factor is omnipresent: the ease of acquiring guns.

"We must stop the glorification of violence in our society. This includes the gruesome and grisly video games that are now commonplace," Trump said.

Adam Lanza, who killed 26 schoolchildren and school employees at the Sandy Hook Elementary School in Connecticut in 2012, spent hours a day playing some of the most violent video games, including one called "School Shooting."

Nikolas Cruz, who killed 17 at Marjory Stoneman Douglas High School in Florida in 2018, reportedly played violent video games up to 15 hours a day.

But Chris Ferguson, a psychology professor at Stetson University who has studied the issue, says there is no causal link with real attacks.

Hundreds of millions of people around the world play first-person shooter games such as Fortnite and Call of Duty, and do not turn into mass murderers. 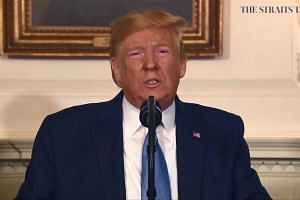 "Violent video games do not contribute to mass shootings, not in whole, not in part," said Ferguson.

"It's probably actively causing harm to the extent it distracts people from real causes of violence," he said on Twitter.

The American Psychological Association has found a link between violent games and films and increased aggression among children, but says it is only one risk factor.

Trump also tied shootings to "mentally disturbed individuals" who should not have access to firearms.

"Mental illness and hatred pull the trigger - not the gun," he said.

There is a link in some cases.

Marine Corps veteran Ian David Long, 28, who killed 12 at a country music bar in California in November last year, was believed to have post-traumatic stress disorder.

Twenty-four-year-old Connor Betts, who killed nine on Sunday at a bar in Ohio, reportedly showed dangerous tendencies while in high school.

And Cruz, the Florida high school attacker, had a history of mental health problems.

"On the face of it, somebody that goes out and massacres a bunch of strangers, that's not the act of a healthy mind," Jeffrey Swanson, a professor in psychiatry at Duke University School of Medicine, told AFP.

Yet, he said, there are 10 million Americans with serious mental illnesses "and the overwhelming majority of them do not engage in violent behavior." Most mass shooters, he said, "do not have the serious identifiable mental illnesses such as schizophrenia, that impairs the brain's ability to reason or see reality, or bipolar disorder."

Divisive politics and the internet

Some attacks are also linked to divisive politics, which play out online, especially on the 8chan website.

Like two earlier mass murderers, the man who killed 22 at a Walmart in Texas on Saturday, identified in media reports as 21-year-old Patrick Crusius, released a "manifesto" on 8chan attacking the "Hispanic invasion" from Mexico, echoing Trump's own political rhetoric.

According to journalist Robert Evans, writing on of Bellingcat, 8chan has turned mass shootings into a video-game-like competition, where body counts are referred to as "high scores."

"The act of massacring innocents has been gamified," he wrote on Sunday.

Still, one common thread in all the attacks is the ease of obtaining weapons and high-capacity magazines.

Robert Bowers, who killed 11 people at a Pennsylvania synagogue last October, carried four guns in his attack and legally owned 21.

And Betts had an assault rifle he ordered online from Texas, equipped with a 100-round drum magazine.