WASHINGTON (NYTIMES) - Democratic congressional leaders called on United States President Donald Trump on Tuesday (Jan 8) to reopen the federal government while they resolved differences with him over securing the southern border, in a formal response to his prime-time address from the Oval Office that they dismissed as riddled with misinformation and fearmongering.

"The President has chosen fear; we want to start with the facts," said Speaker Nancy Pelosi of California, speaking from her office at the Capitol beside Senator Chuck Schumer of New York, the minority leader, as they delivered a joint response to the President.

She said Mr Trump had rejected bipartisan legislation to reopen the government "over his obsession with forcing American taxpayers to waste billions of dollars on an expensive and ineffective wall - a wall he always promised Mexico would pay for".

Mr Schumer suggested that the President's formal address to the nation - Mr Trump's first from the Oval Office - had been a stunt.

"This President just used the backdrop of the Oval Office to manufacture a crisis, stoke fear and divert attention from the turmoil in his administration," he said.

The dueling speeches from opposite sides of Pennsylvania Avenue unfolded at the close of Day 18 of a government shutdown over Mr Trump's demand for US$5.7 billion (S$7.7 billion) for a border wall that Democrats have steadfastly opposed.

The Democratic leaders' decision to select themselves as the message bearers to counter the President underscores how a partisan power struggle in a new era of divided government is undergirding the discussions over resolving the shutdown, even as the pay cheques of hundreds of thousands of federal workers and benefits for millions of Americans hang in the balance.

Mr Trump, who spent much of the first two weeks of the shutdown cloistered inside the White House saying little about it, is now using the powers of the presidency to focus public attention on his ominous immigration message in an effort to build support for the idea of erecting a large wall on the border with Mexico.

Democrats, newly in control of the House, are steering clear of talk of the wall itself and instead are working to focus attention on the damaging impacts of the shutdown.

"We don't govern by temper tantrum," Mr Schumer said. "No president should pound the table and demand he gets his way or else the government shuts down, hurting millions of Americans who are treated as leverage."

Appealing to Mr Trump directly, he added: "Mr President, reopen the government and we can work to resolve our differences over border security, but end this shutdown now."

Senator Bernie Sanders, who ran unsuccessfully for the Democratic presidential nomination in 2016, used a response to the President he streamed live on YouTube to brand Mr Trump a liar, and ticked down a list of mis-statements the President uttered during his address. 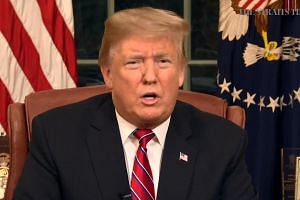 As Democrats take control over the House, Trump faces pressure on various fronts

"It gives me no pleasure to tell you what most of you already know, and that is that President Trump lies all of the time, and in remarks tonight and in recent weeks regarding immigration and the wall, he continues to lie," Mr Sanders said.

He went on to discuss the plight of millions of Americans who lack health insurance, elderly people who have no retirement savings, millions more with crippling student debt and the spectre of global climate change, arguing that those challenges were far more pressing than the one posed by illegal immigration.

Mr Trump is planning a trip to the border in McAllen, Texas, on Thursday, while Democrats plan to bring up a succession of Bills this week to reopen shuttered parts of the government, including the Internal Revenue Service (IRS), to allow tax refunds to be paid, and the Agriculture Department, to ensure that food assistance and farmer support payments can be made.

The Treasury Department and the IRS will come first, then Agriculture and Interior Department programmes, including the national parks, on Thursday, followed by transportation and housing programmes on Friday.

"We are going to, daily, urge and take efforts to open up the government," said Mr Steny Hoyer, the majority leader. "Whatever problems confront us, they are exacerbated - not relieved - by shutting down government."

A group of Senate Democrats spent on Tuesday evening taking turns on the Senate floor calling on Senator Mitch McConnell of Kentucky, the Senate majority leader, to bring up the House-passed legislation to reopen the government.

The dozen Democrats, led by Senator Tim Kaine of Virginia and Senator Jeanne Shaheen of New Hampshire, plan to spotlight the harm from the shutdown on federal workers and those who benefit from government programmes.

"Rather than Donald Trump putting on a political show tonight on TV and a political trip to the border tomorrow, I invite the President to come anywhere in Virginia, Maryland, or the District and sit down with federal employees and explain this crisis and why they are not getting paid," said Senator Mark Warner.

"We need to negotiate additional border security - I am all for it - but not holding hostage, literally, our federal employees and countless others."

In the House, the shutdown has proved a unifying issue for newly elected Democrats who campaigned as fierce opponents of Mr Trump.

In a brief but scathing speech from the House floor, Ms Ayanna Pressley, representative from Massachusetts, spoke directly to the President, uttering his name and earning a gentle reprimand from the presiding officer, who reminded her that lawmakers are barred from personally impugning the President or other elected officials.

"You devalue the life of the immigrant, the worker and the survivor," Ms Pressley said.

"This has nothing to do with border security; your shutdown, another Trump-generated crisis, has brought a tsunami of hurt to the American people."