WASHINGTON (BLOOMBERG) - United States President Donald Trump said his administration is now planning a steel barrier on the US border with Mexico rather than a concrete wall, even as he renewed a threat to invoke a national emergency as a way to circumvent Congress on border funding.

Mr Trump told reporters that his next move may depend on what happens in coming days on attempts to end a partial government shutdown now into its third week.

He declared a meeting on Sunday chaired by Vice-President Mike Pence "productive", even as Democrats said no progress had been made and no further meetings of the group were scheduled.

"I may declare a national emergency dependent on what's going to happen over the next few days," Mr Trump told reporters on Sunday (Jan 6) before departing to the Camp David presidential retreat in Maryland for what he termed "meetings on Border Security and many other topics" with senior White House staff.

It is unclear which of Mr Trump's aides attended the meeting beyond Mr Bill Shine, deputy chief of staff for communications.

"We have a crisis at the border of drugs, of human beings being trafficked all over the world," he said. "They're coming through and we have an absolute crisis - and of criminals and gang members coming through. It is national security. It's a national emergency." 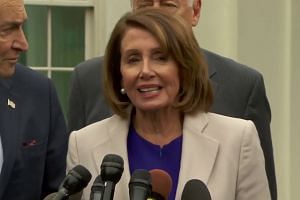 As Democrats take control over the House, Trump faces pressure on various fronts

Democrats have already threatened a legal fight if Mr Trump tries to declare a national emergency. "He'll face a challenge, I'm sure," Democratic Senator Dick Durbin of Illinois said on Sunday on CBS's Face The Nation.

Republican Senator Richard Shelby of Alabama said on Fox News that Mr Trump has some "inherent powers" to bypass Congress, but that border funding must be done the right way, via legislation.

A delegation of top White House aides, led by Mr Pence, met again with congressional staff on Sunday after a lengthy discussion last Saturday was unable to forge a deal. Mr Trump said on Twitter that "not much headway" was made last Saturday and he told reporters on Sunday that the next meeting was unlikely to produce results either.

He later tweeted that the meeting was "productive" with "many details" of border security discussed. But no progress was made, and while there are places both sides can work together, Mr Trump will not budge on Democrats' request to reopen the government first, said a personal familiar with the discussions.

Democrats were given a list of the administration's proposals that include the wall, and Republicans reiterated their resolve to reopen the entire government while dealing with border security, aides said. Democrats have not received the full budget justification they requested and another meeting of the group is not scheduled, according to a Democratic official familiar with the meeting.

Mr Trump said last Friday he could declare a national emergency to circumvent lawmakers and build the wall, though budget experts said Congress would still need to allocate the funds.

Asked about it on Fox News Sunday, White House Press Secretary Sarah Huckabee Sanders said "whatever action he takes will certainly be lawful and we're looking at every option".

Washington Democrat Adam Smith, the incoming chairman of the House Armed Services Committee, said Mr Trump has the authority to declare an emergency and have the US military build the wall, but that such an action would likely be challenged and would be a bad use of defence spending.

"In this case, I think the President would be wide open to a court challenge saying, 'Where is the emergency?'" Mr Smith said on ABC's This Week on Sunday. "You have to establish that to do this."

Democratic Representative Adam Schiff of California, chairman of the House Intelligence Committee, disputed that the President has the power to act on his own.

"Look, if Harry Truman couldn't nationalise the steel industry during wartime, this President doesn't have the power to declare an emergency and build a multibillion-dollar wall on the border," Mr Schiff said of the former president on CNN.

Mr Trump and Democrats are at an impasse over his demands for US$5.6 billion (S$7.6 billion) to build a wall, which has caused a partial government shutdown that entered its 16th day on Sunday. While Democrats have offered funding for border security, House Speaker Nancy Pelosi has called a wall "immoral".

Mr Trump is willing to rule out concrete for the wall if that helps reach a deal with Democrats, acting White House Chief of Staff Mick Mulvaney said in an interview taped last Saturday.

"If he has to give up a concrete wall, replace it with a steel fence to do that so that Democrats can say, 'See? He's not building a wall anymore', that should help us move in the right direction," Mr Mulvaney said on NBC's Meet The Press, one of two appearances on Sunday morning political shows.

Mr Trump told reporters the steel barrier would "give us great strength".

He tweeted that steel is "both stronger & less obtrusive. Good solution, and made in the USA".

Earlier, he said he would phone the chief executive of US Steel.

While the substitution of a steel fence for a concrete wall was presented as a fresh attempt to compromise, Mr Trump has been tweeting about a steel barrier for weeks, and on Dec 21 showed a prototype of a tall structure topped by sharp spikes.

House Democratic Leader Steny Hoyer said on Sunday on NBC's Meet The Press that the suggestion of a steel fence versus a concrete wall "will be discussed", but that "we need to open up the government first" before talking about it.

Democrats on Sunday released the text of four appropriations Bills to immediately fund key parts of the federal government. The House is expected to consider each of the measures this week.

In an interview on NBC, Republican Senator Susan Collins of Maine called the debate about whether the barrier should be constructed out of concrete or steel "bizarre" and said she was frustrated that both sides "appear to be intransigent". Ms Collins, one of at least three Senate Republicans who have called for reopening government while the debate over the wall continues, said she would like to see Senate Majority Leader Mitch McConnell bring House-passed appropriation Bills to the floor.

Mr Trump said in December that he would "take the mantle of shutting down" the government over border security and he believes the stand-off could be solved in 10 minutes, Mr Mulvaney said in an appearance on CNN's State Of The Union on Sunday.

But the White House and congressional Democratic negotiators cannot even agree on "basic facts" and Democrats are stalling because they think Mr Trump is losing the battle over public opinion, he said.

"The Democrats, for better or worse, think they are winning this battle politically," Mr Mulvaney said.

Meanwhile, the shutdown is having wide-reaching effects.

About 800,000 federal employees are furloughed or working without pay. Airlines cannot get permission to add new planes to their fleets, mortgage lenders cannot verify the income of borrowers and the Food and Drug Administration cannot accept many new drug applications.

Mr Trump tweeted about the wall early on Sunday, quoting past comments in support of a barrier by former president Barack Obama, whose name he misspelled, and Senator Hillary Clinton, and insisting that the wall will end illegal border crossings and crime.

"The only reason they do not want to build a Wall is that Walls Work!" he tweeted.