In a remarkable turnabout from the confirmation hearings earlier this month in which he presented himself as the model of neutrality, Judge Kavanaugh fumed that the sexual assault allegations brought against him in recent days had been a "calculated and orchestrated political hit, fuelled with apparent pent-up anger about President Trump and the 2016 election".

He called it "revenge on behalf of the Clintons" and pointed to "millions of dollars in money from outside left-wing opposition groups".

Judge Kavanaugh's statements marked an extraordinary moment in the history of Supreme Court confirmation battles. Not only was a potential justice on the highest court raging against one of the country's two major political parties, but he was also levelling a serious allegation - that the process itself was being manipulated.

In her testimony, his accuser, Dr Christine Blasey Ford, stressed that, despite having sent her allegations to two Democrats in Congress, she viewed herself as non-partisan."I am nobody's pawn," she said.

But over the course of Thursday's hearing, partisan tensions repeatedly boiled over as Republicans echoed Judge Kavanaugh's claim that the Democrats had engineered the process to ensure his demise in the final weeks before the mid-term elections.

At issue was whether the Democrats, who had first received Dr Blasey Ford's allegations in an early July letter that she sent to her local congresswoman, had purposefully waited to make them public until after the initial confirmation hearings were over and the Senate was preparing to vote.

Republican senators repeated that claim throughout the day, most notably in an impassioned speech by Senator Lindsey Graham of South Carolina, who called the proceedings an "unethical sham" and boomed that any Republican who voted against Judge Kavanaugh was "legitimising the most despicable thing I have seen in my time in politics".

Democratic senators said they had not released the allegations initially because Dr Blasey Ford had asked to keep them confidential.

But Democrats were not able to explain on Thursday how the information eventually leaked out - a development that ultimately compelled Dr Blasey Ford to come forward.

"Dr Blasey Ford asked that her information be kept confidential, and it was," said Senator Dianne Feinstein, a California Democrat, the top Democrat on the Senate Judiciary Committee. "I only referred her letter to the FBI after it was leaked and reporters were knocking on her door. I don't know who leaked the information, but it wasn't my office."

Under questioning during the hearing from Ms Rachel Mitchell, an Arizona sex crimes prosecutor hired by the Republicans, Dr Blasey Ford acknowledged that she had contacted two Democratic lawmakers with her allegations.

She said that she made her initial contact upon learning that Judge Kavanaugh was on the shortlist of possible picks but before he was nominated, and that she had intended to remain anonymous.

While it has become common for senators to engage in partisan jousting over judicial nominations, Judge Kavanaugh took an unusual path for a nominee in tying himself so closely with President Donald Trump and the GOP.

By turns seething and scornful, Judge Kavanaugh seemed to adopt Mr Trump's assertion on Wednesday that the attacks against him were a "con job".

In fighting back so forcefully, Mr Kavanaugh also adopted the President's oft-stated belief in hitting back 100 times harder against attackers.

Mr Trump borrowed a line from Judge Kavanaugh, who cited the constitutional role of the Senate during the hearing to say that Democrats had "replaced advise and consent with search and destroy".

Said Mr Trump in his tweet: "Democrats' search and destroy strategy is disgraceful and this process has been a total sham and effort to delay, obstruct, and resist."

Casting aside the norms of decorum that have traditionally characterised such Senate hearings - norms that Judge Kavanaugh had largely adhered to during his earlier appearances - the nominee appeared unconstrained as he expressed clear hostility toward Democratic members.

"Since my nomination in July, there's been a frenzy on the left to come up with something, anything, to block my nomination," Judge Kavanaugh said.

Democrats, he said, want to "blow me up and take me down".

He lashed out at the Democrats for their behaviour at his prior appearance, likening their treatment of him to Democrats' successful effort decades earlier to defeat the nomination of conservative Judge Robert Bork. 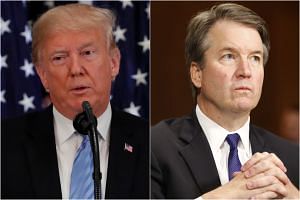 "The behaviour of several of the Democratic members of this committee at my hearing a few weeks ago was an embarrassment," he said. "But at least it was just a good old-fashioned attempt at Borking."

When Ms Feinstein complained that the FBI wasn't interviewing witnesses and providing the committee with facts, Judge Kavanaugh interjected: "You're interviewing me. You're - you're doing it, senator. I'm sorry to interrupt."

Ms Feinstein then asked him whether allegations by two other women - who didn't testify on Thursday - "are wrong".

"Would you like to say more about it?" Ms Feinstein asked.

When Senator Amy Klobuchar, a Minnesota Democrat, asked whether he had suffered memory loss from drinking, Judge Kavanaugh denied it and then challenged her, saying "You're asking about blackout. I don't know, have you?"

She ignored his query, and he later apologised.

Judge Kavanaugh also responded to questions from Democrat Sheldon Whitehouse about his drinking by telling the Rhode Island senator, "I like beer."

Judge Kavanaugh's testimony could raise questions about his temperament and whether, if he is confirmed, he can ever be seen as a neutral figure on the Supreme Court.

"We can only assume that he's doing this for an audience of one, who may be watching," Dr Gillers said, referring to Mr Trump.

Dr Gillers said Judge Kavanaugh was "exhibiting the very uncontrolled anger that others have described as a problem he has when drunk, but he's not drunk. He's squandering the sympathy some of his opening statement encouraged. Or he just doesn't know how to handle cross-examination and no one prepared him."

Analysts said that while the hearing was always expected to be partisan, Thursday's testimony marked a remarkable devolution from which the Senate will struggle to recover.

"What we saw all afternoon from both Judge Kavanaugh and senators in the majority was an effort to portray this whole episode as a nefarious plot," said Dr Stephen Vladeck, a law professor at the University of Texas.

"People can disagree about whether they find that claim plausible, but for the Senate, the Supreme Court, and the country, it's a sad moment - and a very bad look."