WASHINGTON (BLOOMBERG) - Supreme Court nominee Brett Kavanaugh angrily, tearfully and "unequivocally" denied sexually assaulting university professor Christine Blasey Ford, after she told senators at a dramatic hearing that she's "100 per cent" certain he is the one who attacked her when they were teenagers.

In testimony that turned the Senate Judiciary Committee hearing into a partisan shouting match, Mr Kavanaugh accused one Democrat of mocking him and listened while a Republican called the session an "unethical sham".

"I was not at the party described by Dr Ford," Mr Kavanaugh said as he tried to save his nomination in the face of public claims of sexual misconduct by three women.

"This confirmation process has become a national disgrace. I will not be intimidated into withdrawing from this process," Mr Kavanaugh said. "I have been through hell and then some."

Mr Kavanaugh's testimony gave senators a stark choice. Earlier in the day, Dr Ford said her accusation was "absolutely not" a case of mistaken identity. She said the 1982 incident - including the "uproarious laughter" of Mr Kavanaugh and his friend who she says witnessed the attack - was "seared into my memory" even though she didn't remember all the details.

The Senate Judiciary Committee is scheduled to vote on Mr Kavanaugh's nomination on Friday, and the full Senate could act as early as next week.

The hearing marked the first time Dr Ford had spoken publicly about her accusation, which could derail the confirmation, redefine the "Me Too" era and affect the fight for control of Congress in the Nov 6 election.

The nominee made no secret of his anger at Democrats on the committee.

"This whole two-week effort has been a calculated and orchestrated political hit, fuelled with apparently pent-up anger about President Trump and the 2016 election, fear that has been unfairly stoked about my judicial record, revenge on behalf of the Clintons and millions of dollars in money from outside, left-wing opposition groups," Mr Kavanaugh told the committee.

Mr Kavanaugh repeatedly flashed his anger at Democrats on the panel, scowling, arguing with them and jabbing his finger towards the table in front of him.

Democrat Patrick Leahy of Vermont asked Mr Kavanaugh about his yearbook and the "drinking" and "sexual exploits" it mentions. But as Mr Kavanaugh started to respond, Mr Leahy tried to cut him off.

Mr Kavanaugh retorted: "I'm going to talk about my high school record if you're going to sit here and mock me."

After Mr Kavanaugh talked about how he "busted his butt" on academics and played sports in high school, Mr Leahy said: "We got a filibuster but not a single answer."

Democratic Senator Dick Durbin challenged Mr Kavanaugh to ask the White House to order the FBI to question other witnesses about Dr Ford's allegations against him, a suggestion rejected by President Donald Trump and Senate Republicans.

Soon afterwards, GOP Senator Lindsey Graham erupted in anger. "What you want to do is destroy this guy's life, hold this seat open and hope you win in 2020," he said, pointing angrily at his Democratic colleagues. "You've said that, not me. You've got nothing to apologise for."

"When you see Sotomayor and Kagan, tell them that Lindsey said hello because I voted for them," Mr Graham said, referring to Democratic-appointed Justices Sonia Sotomayor and Elena Kagan.

"I would never do to them what you've done to this guy. This is the most unethical sham since I've been in politics."

Dr Ford told the committee that she's an independent person and "no one's pawn". She said she was sure that Mr Kavanaugh was the person who attacked her.

"With what degree of certainty do you believe Brett Kavanaugh assaulted you?" Democratic Senator Dick Durbin of Illinois asked Dr Ford.

"One hundred per cent," she responded.

Dr Ford, a California psychology professor, said the incident has "haunted me episodically as an adult".

She said she was "terrified" to testify before the committee and that she "agonised daily" about whether to come forward with her claim.

Mr Kavanaugh said: "I intend no ill will to Dr Ford and her family."

He choked back tears while saying that his 10-year-old daughter, in saying her evening prayers recently, told his wife Ashley, "we should pray for the woman".

The nominee was tearful through portions of his opening statement: While expressing gratitude to his friends, saying he had no sexual intercourse until well after high school, and saying he drank beer in high school.

"But I did not drink beer to the point of blacking out and I did not sexually assault anyone," he said. 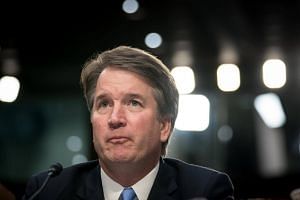 Mr Kavanaugh said Dr Ford's allegation is "refuted by the very people she says were there", including a female friend of Dr Ford's who says she doesn't remember the party. He said his calendar for the summer of 1982 "shows all but definitely that I was not there".

If an unproven allegation "is enough to destroy a person's life and career we will have abandoned the basic principles of fairness and due process that define our legal system and our country", Mr Kavanaugh said.

Republicans are looking for Mr Kavanaugh to cement a conservative majority on the court, while Democrats say he could provide the fifth vote to overturn the Roe versus Wade decision that legalised abortion.

President Trump watched the morning portion of the hearing from Air Force One and the afternoon session from the White House residence, aides said. White House Press Secretary Sarah Sanders said he hasn't talked to Mr Kavanaugh in a couple of days.

Mr Kavanaugh forcefully assailed the committee's handling of Dr Ford's claims, saying that during the 11 days since the allegation became public, "my family and my name have been totally and permanently destroyed by vicious and false accusations".

Dr Ford said Mr Kavanaugh's friend, Mr Mark Judge, was in the room during the attack and that the two were laughing at her. She said she had an "indelible" memory of "the uproarious laughter between the two, and their having fun at my expense".

Senator Richard Blumenthal, a Connecticut Democrat, brought Dr Ford to tears when he thanked her for coming forward.

"If we agree on nothing else today, I hope on a bipartisan basis we can agree on how much courage it has taken for you to come forward, and I think you have earned America's gratitude," Mr Blumenthal said.

During a break, GOP Senator Orrin Hatch of Utah said he still expects the Judiciary panel to vote on Mr Kavanaugh on Friday and expects him to be voted out favourably.

Questioning of Dr Ford proceeded in five-minute chunks. Other than committee chairman Chuck Grassley, the committee's Republicans stayed mum, each instead having Arizona sex-crimes prosecutor Rachel Mitchell ask questions during his allotted minutes. The 11 Republicans on the committee are all men.

"I found no reason to find her not credible," Republican Senator John Cornyn of Texas said after Dr Ford completed her testimony, though he said Mr Kavanaugh's "reputation is on the line, his career as well".

Ms Mitchell's questioning presented a stark contrast to the sweeping statements of support from Democrats. Mitchell spent most of her time trying to clarify details of Dr Ford's story, covering the night of the alleged assault and the professor's decision to come forward by confidentially telling her congressional representative and the Washington Post.

Dr Ford said that though they went to different high schools, she had been friendly with a classmate of Mr Kavanaugh's and attended a number of parties that the future judge also attended.

She said the attack occurred after she went upstairs to use the bathroom. She said she was pushed into a bedroom and onto a bed and that Mr Kavanaugh got on top of her. Mr Judge was in the room and encouraged the attack, she said.

"I believed he was going to rape me," Dr Ford said. Mr Kavanaugh put his hand on her mouth to keep her from screaming, she said, and because it was hard for her to breathe, "I thought that Brett was accidentally going to kill me."

She said Mr Judge, who has denied any part in such an attack, jumped on them and she was able to escape.

Asked what she remembers from that night, Dr Ford responded: "The stairwell, the living room, the bedroom, the bed on the right side of the room as you walk into the room - there was a bed to the right - the bathroom in close proximity, the laughter - the uproarious laughter - and the multiple attempts to escape and the final ability to do so."

Under questioning from Ms Mitchell, Dr Ford said she didn't know how she got home that night. She said the party took place "somewhere between" her home and the Columbia Country Club, about seven miles away.

The Washington Post previously reported she told the paper the party took place near the country club.

"Has anyone come forward to say to you, 'Hey, remember, I was the one that drove you home'?" Ms Mitchell asked.

"No," Dr Ford responded. She said she didn't have her driver's licence at the time.

'I WANT TO APOLOGISE'

In opening the hearing, Mr Grassley said, "I want to apologise to you both for the way you've been treated", referring to threats made against Dr Ford and Mr Kavanaugh after her allegation became public.

As she prepared to leave, he thanked her "for your bravery coming out and trying to answer our questions as best you could remember".

Democratic Senator Dianne Feinstein of California thanked Ford for her "strength and bravery in coming forward".

"This is not a trial for Dr Ford," Senator Feinstein said. "It's a job interview for Judge Kavanaugh."

Senator Feinstein noted that two other accusers came forward in the last several days. They aren't scheduled to testify before the committee.

A second woman, Ms Deborah Ramirez of Colorado, claims Mr Kavanaugh exposed himself to her at a drunken party when they were freshmen at Yale University. And in the most lurid allegation yet, Ms Julie Swetnick of Washington said in a sworn statement released on Wednesday that Mr Kavanaugh took part in efforts during high school to get girls intoxicated so that a group of boys could have sex with them.

"The Swetnick thing is a joke, that is a farce," Mr Kavanaugh said at the hearing.

Republicans are trying to get Mr Kavanaugh, 53, confirmed as early as next week. Republicans hold a 51-49 advantage in the Senate and can't afford more than one defection to ensure confirmation without Democratic support.

Several GOP lawmakers who remain publicly undecided - most notably Alaska's Lisa Murkowski, Maine's Susan Collins and Arizona's Jeff Flake - said they wanted to hear what Dr Ford has to say before making up their minds.

Capitol police imposed strict security measures to keep protesters at bay after about 70 people were arrested each day during Mr Kavanaugh's earlier hearing. At Dr Ford's request, the hearing was held in a smaller room with less space for media and the public, and protesters were being kept off that floor of the office building.