DUBAI (AFP) - Tensions in the Gulf have escalated in recent months amid a deepening stand-off between Iran and United States over Teheran's nuclear programme, with a string of incidents involving tankers and drones.

Here is a recap:

On May 5, the United States says it is sending an aircraft carrier strike group and a bomber task force to waters near Iran in response to "indications of a credible threat by Iranian regime forces".

The Pentagon also sends B-52 bombers to the region and later, an amphibious assault ship and Patriot missile defence battery.

US officials do not give more details on the threats, but the move comes amid heightened tensions over Iran's nuclear programme.

On May 8, Iran announces it will drop certain commitments under the agreement, including increasing enriched uranium and heavy water production.

On May 12, the United Arab Emirates says four commercial oil tankers had been targeted by "acts of sabotage" in Gulf waters off its coast.

The other vessels were Norwegian and Emirati.

A UAE investigation finds later that a "state actor" was likely responsible for the attacks, probably using limpet mines, but does not specifically blame Iran.

In the early hours of June 13, two fuel-loaded tankers passing through the Strait of Hormuz towards the Indian Ocean are hit by mysterious blasts that cause major fires.

One is a Norwegian vessel and the other is Japanese-owned. Their crews are rescued.

The strait is a vital corridor connecting the petroleum-rich states of the Middle East with markets around the world.

Washington, London and Riyadh accuse Teheran of being behind the attacks, which it denies.

On June 18, rockets strike an oil field in Iraq's Basra region, near a camp used by a company of US industrial conglomerate General Electric.

It is the latest in a nearly week-long barrage of anonymous shelling attacks on American interests across Iraq.

The incidents are not claimed, but largely originate from areas where Shi'ite-dominated armed groups loyal to Teheran have free rein.

On June 20, Iran's Revolutionary Guards says it shot down a US drone which violated Iranian airspace.

The Pentagon says the drone was in international airspace and denounces an "unprovoked attack".

Trump says he approved a retaliatory strike the next day but cancelled it at the last minute.

On July 11, Britain says three Iranian military vessels had tried the previous day to "impede the passage" of a UK oil tanker in Gulf waters but were warned off by a British warship.

Iran's Revolutionary Guards denies there was any confrontation, but warns that US and Britain will "strongly regret" the seizure in early July of a tanker off Gibraltar, a British overseas territory in the Mediterranean.

On July 18, Iran's Guards says it has detained a "foreign tanker" and its crew for allegedly smuggling fuel.

The tanker was seized south of the Iranian island of Larak, according to the Guards, which does not detail the name or provenance of the vessel.

US shoots down Iranian drone

On July 18, Trump says the US military has taken down an Iranian drone that came within 1,000 yards (914m) of one of its naval vessels in the Strait of Hormuz.

The USS Boxer "took defensive action" against the Iranian drone as it was "threatening the safety of the ship and the ship's crew", Trump says.

Iran denies the claim and suggests American forces may have shot down their own drone by mistake. 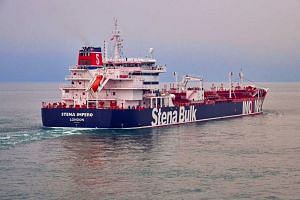 Saudi to host US forces again

Teheran's arch-foe Saudi Arabia announces that it will host US troops on its soil in a joint move with Washington to "preserve the security of the region and its stability".

Saudi Arabia has not hosted US forces since 2003, when they withdrew following the toppling of Iraqi dictator Saddam Hussein.