LONDON (REUTERS) - Just days before the United Kingdom was due to leave the European Union, the March 29 cliff edge was moved by two weeks to April 12. However, it is still uncertain how, when or if Brexit will happen.

Nearly three years since the 2016 Brexit vote, the deepest political crisis in recent British history has left three main options: leaving without a deal, leaving with a deal, or stopping the entire divorce.

Even the details of exactly when Brexit might happen are vague: It might leave abruptly at 2200 GMT on April 12 but EU officials said it could also be later, deal or no deal.

The following are the main scenarios:

1. NO-DEAL EXIT: The chaos in London is such that Parliament rejects Prime Minister Theresa May's Brexit deal for a third time next week and the United Kingdom exits without a deal shortly after April 12.

This is the nightmare scenario for many businesses: it would spook financial markets and dislocate supply chains across Europe and beyond. The political and social impact is unclear.

EU leaders on Thursday (March 21) agreed to give Mrs May two weeks' reprieve, until April 12. Only if lawmakers approve Mrs May's deal will the exit will be delayed until May 22. 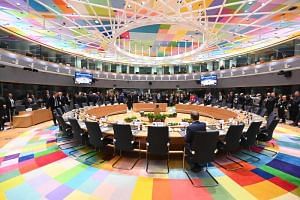 "The UK Government will still have a choice of a deal, no-deal, a long extension or revoking Article 50," said summit chair Donald Tusk, referring to the treaty clause that covers Britain's departure.

"The 12th of April is a key date in terms of the UK deciding whether to hold European Parliament elections. If it has not decided to do so by then, the option of a long extension will automatically become impossible."

A long extension is envisaged as being for one year, giving time for Britain to hold an election, a referendum or both.

This avoids delaying so long that Britain's presence would complicate negotiations for a new EU long-term Budget from 2021.

In effect, the EU has now put the onus back on Britain, which must decide by April 12 whether to participate in EU elections as part of a long-term rethink or prepare to quit by May 22, or possibly in June, without a deal.

"Everything is now in the hands of the House of Commons. That's the message," a senior EU official said.

So if Mrs May's deal fails again, the risk of an accidental no-deal exit shoots up unless Parliament can find another option - effectively usurping the Prime Minister and her government.

It is still unclear when Parliament will vote on her deal, but Tuesday is most widely expected.

To succeed, Mrs May must win over at least 75 lawmakers: dozens of rebels in her Conservative Party, some Labour lawmakers, and the Northern Irish Democratic Unionist Party (DUP), which props up her minority government.

If Mrs May hoped a televised address on Wednesday would persuade wavering lawmakers to support her, it appears to have backfired, alienating the people she must win over.

As of Thursday, it appeared unlikely that Mrs May's deal will pass next week, though the prospect of no deal may swing more lawmakers behind her.

When the other 27 leaders of the EU conferred on Thursday, they felt even less convinced than before that she will pass the deal, officials told Reuters.

French President Emmanuel Macron said that before coming to Brussels, he had thought Mrs May had a 10 per cent chance of winning the vote. After listening to her, he cut that to five per cent.

After months of predicting that Mrs May would ultimately get her deal approved, some banks have now changed their view.

Goldman Sachs raised the probability of a no-deal exit to 15 per cent from 5 per cent.

Mrs May says she will not delay Brexit beyond June 30 though the EU has said the United Kingdom must be out of the bloc it joined in 1973 by the time EU Parliament elections are held from May 23 to 26.

If Mrs May's deal fails a third time, her Brexit negotiation will have collapsed and her authority would be shot, though the mechanism for removing her is still unclear.

She could call a general election, though that would also require a delay to avoid a no-deal exit.

No-deal means there would be no transition so the exit would be abrupt. Britain is a member of the World Trade Organisation, so tariffs and other terms governing its trade with the EU would be set under WTO rules.

Britain says it will eliminate import tariffs on a wide range of goods and keep the border between Ireland and Northern Ireland free of customs checks if it leaves without a deal, but the EU would apply normal WTO tariffs on trade.

2. BREXIT WITH A DEAL: Mrs May gets her deal approved at a third attempt and the United Kingdom leaves in an orderly fashion on May 22. Or Mrs May loses and Parliament grabs control at the last minute and comes up with something different.

If Mrs May's deal fails, or if another vote on the same deal is prevented, Parliament could take control of Brexit before April 12, seeking a closer relationship with the EU by staying in its customs union.

"At this point, we would either leave with no deal, or put forward an alternative plan," Mrs May said after the EU summit.

Lawmakers are due on Monday to debate a government motion saying Parliament has considered a statement made by Mrs May on March 15 which set out the government's next steps on Brexit, including the plan to seek a delay.

They are likely to propose changes, or amendments, to this motion setting out alternative ways forward on Brexit. These are expected to include a proposal to approve Mrs May's deal only if it is put to a public vote.

While amendments are not legally binding, instead simply exerting political pressure on Mrs May to change course, lawmakers could use one to attempt to change the rules of Parliament to wrest control of the Brexit process from the government.

They could even use an amendment to seek a vote on revoking Article 50 of the Lisbon treaty to cancel Brexit.

Some lawmakers have proposed a set of indicative votes to plot a way forward. If Mrs May's deal is defeated on Tuesday, this could happen on Wednesday.

Parliament should be given the opportunity to find an alternative way and lawmakers would support a Norway-style post-Brexit relationship, Conservative lawmaker Oliver Letwin said.

3. STOPPING BREXIT: Mrs May's deal fails and Parliament decides to revoke the Article 50 divorce notice or demand another referendum. Or Mrs May falls and a national election is called.

European leaders have repeatedly raised the possibility of Britain revoking Article 50, which Mrs May has repeatedly said she will not do.

Another option is to call a referendum.

While many surveys ahead of the vote incorrectly predicted that the United Kingdom would vote to stay in the club it joined in 1973, polls now suggest no great desire for a second referendum and indicate that many voters, fatigued by the political squabbling, would be happy to leave without a deal.

Opposition Labour Party leader Jeremy Corbyn, who voted against membership in 1975 and gave only reluctant backing to the 2016 campaign to remain, has given ambiguous support for another referendum, saying he would push for one alongside a national election.

Asked if he would vote to remain in a possible future referendum, Mr Corbyn said on Sunday: "It depends what the choice is in front of us."

In government, there are worries that a second referendum would exacerbate the deep divisions exposed by the 2016 vote, alienate millions of pro-Brexit voters and stoke support for the far-right.

Already, many supporters of Brexit, and even some lawmakers, say the elite have sabotaged the EU divorce and are trying to subvert the will of the people.

It is far from clear how Britain would vote. And if it did vote to remain, Brexit supporters might demand a third and decisive vote.