British lawmakers on Tuesday (Jan 15) resoundingly rejected the Brexit deal negotiated by Prime Minister Theresa May with the European Union, leaving the country lurching towards its March 29 deadline of withdrawal from the regional bloc with still no deal in place.

Opposition leader Jeremy Corbyn swiftly tabled a vote of no confidence after the deal was rejected 432-202 in a parliamentary vote, a defeat he called catastrophic and the biggest for any British government since the 1920s.

The motion of no confidence will be debated and voted upon on Wednesday, said Mrs May after the defeat.

Mrs May said that the House had spoken and the government would listen, but added: “It is clear that the House does not support this deal but tonight's vote tells us nothing about what it does support. Nothing about how, or even if, it intends to honour the decision the British people took in a referendum Parliament decided to hold.

“People, particularly EU citizens who made their home here and UK citizens living in the EU, deserve clarity on these questions as soon as possible. Those whose jobs rely on our trade with the EU need that clarity,” she said.

Mrs May said that if her government survives the no-confidence motion, she will hold talks with other parties to identify Brexit approaches that are “genuinely negotiable and have sufficient support” of MPs, and go back to the EU with these ideas for renegotiation.

Theresa May makes final plea ahead of Brexit vote
British PM Theresa May: We are leaving the EU on March 29

Both UK party leaders made clear that neither the government nor the opposition wants Brexit without a deal.

Said Mrs May: “To those who fear the government’s strategy is to run down the clock to March 29: That is not our strategy. I've always believed the best way forward is to leave in an orderly way with a good deal, and have devoted much of the last two years to negotiating such a deal.”

Mr Corbyn, who slammed Mrs May and her Conservative Party for failing to reach out to other parties, said: “No-deal must be taken off the table. A permanent customs union must be secured, and people’s rights and protections must be guaranteed so they do not fall behind.”

A national election could follow if Mrs May’s government is defeated in the no-confidence vote. But whether the opposition has the numbers to topple the government is unclear.

Northern Ireland’s Democratic Unionist Party (DUP), a coalition partner of the Conservative Party, said on Tuesday evening that it will support the government in Wednesday’s vote. But the Scottish National Party supported the no-confidence motion, said its leader Nicola Sturgeon. 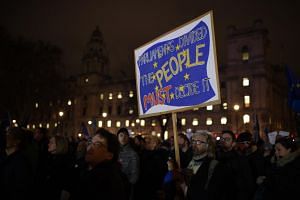 Some like former foreign secretary Boris Johnson called the defeated proposal a mandate for Ms May to return to the EU for renegotiations, viewing it as a signal that British politicians would not accept the current agreement as it stood.

Similarly, DUP leader Arlene Foster said in a statement: "Mrs May will now be able to demonstrate to the Brussels’ negotiators that changes are required if any deal is to command the support of Parliament... The Prime Minister must now go back to the European Union and seek fundamental change to the withdrawal agreement."

Outside Parliament, hundreds of anti-Brexit activists waved EU flags and erupted into cheers as the government’s divorce deal was crushed by MPs.

“I’m so pleased – but a bit concerned with what comes next,” retiree Sarah Cuthbertson, 68, told AFP.  “I didn’t think it would be such a big majority against,” she said of the whopping 230-vote margin of defeat.

Businesses, however, were alarmed at the heightened risk of a EU withdrawal without a deal.

“Everyone's talking about political uncertainty, which is really, really bad for business… We're seeing exporters tell us that exporting is going to be down in the next quarter. This is normally a resilient bunch and they're looking on with horror at the political machinations," Federation of Small Businesses head Mike Cherry told Channel 5 News.

British Chancellor of the Exchequer Philip Hammond sought to assure business leaders that their no-deal nightmare scenario could still be avoided.

On an hour-long conference call with the main British business lobby groups following the vote, Mr Hammond floated the possibility of delaying the departure beyond the March 29 deadline, Bloomberg reported.

"There are no more words to describe the frustration, impatience, and growing anger amongst business after two and a half years on a high-stakes political roller coaster ride that shows no sign of stopping," Adam Marshall, director general of the British Chambers of Commerce, said ahead of the briefing.

Mrs May’s deal was widely expected to have been rejected. The vote had been abruptly postponed five weeks ago after the Prime Minister conceded that it would have been soundly defeated due to concerns over the fate of Britain’s only land border, with Ireland. 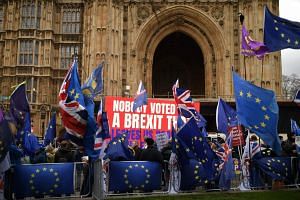 Brexit in dates: From Leave shock to Parliament's historic vote

Said Mrs May: “Every day that passes without this issue being resolved means more uncertainty, more bitterness, more rancour... I ask members from all sides of the house to listen to the British people who want this issue settled, and to work with the government to do just that.”

“This is a bitter day for Europe. We are well prepared – but a hard Brexit would be the least attractive choice, for the EU and GB (Great Britain),” he said.

A spokesman for European Council president Donald Tusk said that the vote had increased the risk of  disorderly exit, and that while the EU did not want that to happen, it would be prepared for it.

“The EU27 will remain united and responsible as we have been throughout the entire process and will seek to reduce the damage caused by Brexit. We will continue our preparations for all outcomes, including a no-deal scenario,” said the spokesman.

Mr Tusk responded to the vote by suggesting that the solution was for Britain to remain in the EU. He wrote on Twitter: “If a deal is impossible, and no one wants no deal, then who will finally have the courage to say what the only positive solution is?”