Mr Macron did not refer to the United States President by name, but his address to the United Nations General Assembly outlined positions that were polar opposites to Mr Trump's world view.

"Some have chosen the law of the most powerful, but it cannot protect any people," said Mr Macron, who reaffirmed his strong backing for multilateralism embodied by the UN and its global peace efforts.

Earlier at the UN podium, Mr Trump vowed to "never surrender America's sovereignty to an unelected, unaccountable global bureaucracy" and to reject "the ideology of globalism".

Since Mr Trump took office in 2017, the US has ditched the Iran nuclear deal and the Paris climate deal - two international accords that France has championed.

The US administration has cut funding to the UN, aid agencies and to UN peacekeeping, whose missions in Mali and the Central African Republic are working with French troops to bolster stability.

Mr Macron pointed to growing economic inequality as one of the drivers of the crisis in the world order, with some 783 million people living under the threshold of poverty and 250 million children out of school.

Touching on the Israeli-Palestinian conflict, the French President said there was no credible alternative to the two-state solution that Mr Trump has imperiled with his recognition of Jerusalem as Israel's capital.

Mr Macron also touched on climate change and migration as global issues that "no one can tackle" on their own.

There was even a warning that trade agreements could be contingent on membership in the Paris climate pact, in a clear bid to pressure the US to rethink its intention to quit the accord.

Defending the Iran nuclear deal, Mr Macron urged dialogue with Teheran, again clashing with the US President who a few hours earlier called on world governments to isolate Iran.

"What will bring a real solution to the situation in Iran and what has already stabilised it? The law of the strongest? Pressure from only one side? No!" Mr Macron said in his address.

"We know that Iran was on a nuclear military path, but what stopped it? The 2015 Vienna accord."

Mr Trump in May withdrew from the seven-nation agreement negotiated under his predecessor Barack Obama, calling it a "disaster" and instead ramping up pressure on Iran including through renewed sanctions.

Supported by Israel and Saudi Arabia, Mr Trump has sought to roll back Iranian influence around the Middle East, including in war-ravaged Syria. 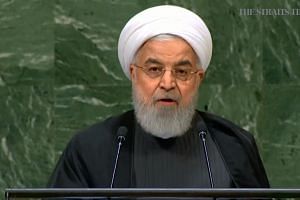 "We should not aggravate regional tensions but rather through dialogue and multilateralism pursue a broader agenda that allows us to address all the concerns caused by Iranian policies - nuclear, ballistic, regional," said Mr Macron.

Speaking at a press conference, Mr Macron said Iran should be able to sell oil to bring down prices, challenging Mr Trump's plan to tighten an economic vise around Iran.

France and other European powers are setting up a way to allow businesses to keep doing business in Iran in hopes of avoiding sanctions by the US.

The French President was due to hold talks later in the day with his Iranian counterpart Hassan Rouhani, who has refused to meet Mr Trump.

Despite their vastly differing world views, Mr Macron and Mr Trump - both political outsiders who defied the odds in winning power - have forged an unlikely relationship.

After meeting Mr Macron on Monday, Mr Trump said the two men have had "some very good experiences" but acknowledged, "on occasion not so good, but 99 per cent very good".

And after Mr Trump's latest espousal of his "America First" foreign policy, Mr Macron again painted himself as an upholder of a more internationalist approach to diplomacy.

"Do not accept the erosion of multilateralism," Mr Macron told the gathering on Tuesday. "Don't accept our history unravelling. I'm not getting used to it and I'm not turning my head," he said. 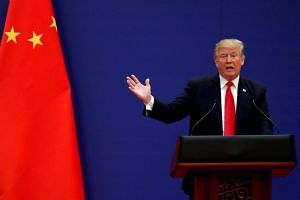 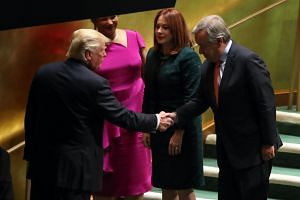 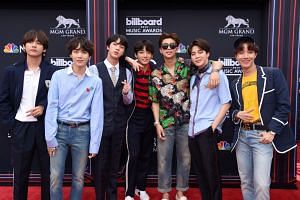 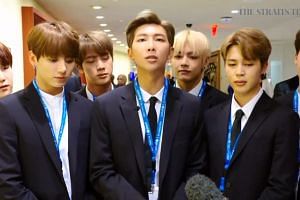