President Donald Trump is poised to withdraw the United States from the Paris climate agreement, according to officials with knowledge of the decision - a move that would severely weaken the landmark climate change accord that committed nearly every nation to take action to curb the warming of the planet.

Minutes after reports surfaced, the President tweeted: "I will be announcing my decision on the Paris Accord over the next few days. MAKE AMERICA GREAT AGAIN!"

The tweet appeared to confirm the reports. Withdrawing the US would be in line with Mr Trump's campaign promises. He had charged that global warming was a hoax perpetrated by China to make US industry less competitive.

Sticking with commitments under the Paris Agreement would cost US industry "trillions of dollars", he had maintained.

The Paris Agreement commits 195 countries to curb greenhouse gas emissions in order to keep global temperature rise to below 2 deg C above pre-industrial levels, and to make efforts to further limit temperature increase to 1.5 deg C, to avoid catastrophic effects on human society. 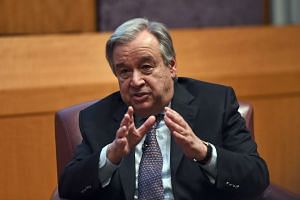 Withdrawing would mean the US would discard or lower its emission reduction targets, said Mr Elliot Diringer, executive vice-president of the non-partisan Centre for Climate and Energy Solutions.

Political analysts said the decision would reflect a victory by a faction in the White House led principally by the President's chief strategist, Mr Steve Bannon, in favour of job creation in fossil fuel-dependent industries, against others such as Mr Trump's own daughter Ivanka and son-in-law Jared Kushner, and Secretary of State Rex Tillerson, who were in favour of sticking to the Paris commitments.

Withdrawing could also hurt industry sectors that have invested in marketing opportunities presented by consumer and technology shifts.

A slew of prominent American corporations well placed to lead in new markets have been lobbying Mr Trump to stay in the agreement.

New York City Mayor Bill de Blasio was quick to tweet: "The President withdrawing from the Paris Agreement would be horribly destructive for the planet, the country and this city."

France's Ambassador to the US Gerard Araud reacted with a tweet: "The Paris accord is a political agreement. It doesn't infringe on US sovereignty. National commitments are voluntary and may be amended."