PARIS (REUTERS) - France, reeling from violent protests over the cost of living, said on Wednesday (Dec 5) it will delay until early next year minimum food price rises, incurring the wrath of the main farmers group which called on its members to take to the streets next week.

Agriculture Minister Didier Guillaume blamed the proposed delay, which was to be discussed at a Cabinet meeting on Wednesday (Dec 5), on the mass demonstrations which have convulsed the country since Nov 17.

"This was postponed because of other issues," Mr Guillaume told CNews TV, referring to the widespread protests over fuel taxes which have dominated the government's agenda.

The minister said the decision would now be implemented by the government in January or February, before the end of annual price negotiations with supermarkets that started last month.

The measures, which also include limiting bargain sales, were originally taken in a "field-to-fork" review of the food sector, are aimed at raising farmers' income.

An important constituency in French politics, farmers have long complained of being hit by a price war between retailers, which has benefited consumers but hurt producers - and they have sought to have the regulations brought in straightaway.

France's largest farm union FNSEA, which says higher minimum food prices will help farm producers struggling on low incomes, warned that farmers would see a delay in the adoption of the measures as a "disastrous signal".

FNSEA president Christiane Lambert said farmers would take to the streets next week to ask the government to "keep its promises" and stop imposing excessive taxes on farmers. 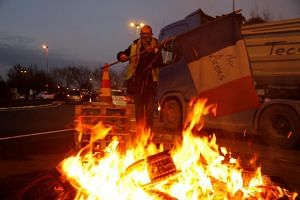 The government intends to raise the minimum price threshold on food products by 10 per cent and limit discounts to 34 per cent of a product's price and to 25 per cent of available volumes, with the aim of rebalancing trade relations for the financial benefit of farmers.

Analysts say the measures, to be applied for a two-year trial period, would reduce aggressive price competition among French retailers and accelerate food inflation.

However, many retailers said the final impact on consumers' total spending would be minimal.

The broad protests, led by the so-called "yellow vest" movement, began last month with the aim of highlighting the squeeze on household spending brought about by increased taxes on fuel but have tapped a growing discontent over President Emmanuel Macron's leadership.