PARIS (AFP) - The French government signalled on Wednesday (Dec 5) that it was prepared to make further concessions to "yellow vest" protesters, even raising a possible rollback on a controversial move to cut taxes for high earners last year.

President Emmanuel Macron faces a crucial few days as he seeks an end to more than two weeks of protests which degenerated last Saturday (Dec 1) into some of the worst violence in central Paris in decades.

The former investment banker was heckled by a crowd as he visited a burned out government building in Puy-en-Velay in central France on Tuesday night, just hours after a new opinion poll showed his approval rating at just 23 per cent.

The so-called "yellow vest" protests began on Nov 17 in opposition to rising fuel taxes, but they have since ballooned into a broad challenge to Mr Macron's pro-business agenda.

One of the frequent demands from the protesters, who are mostly from rural or small-town France, is a repeal of Mr Macron's move last year to cut the ISF "fortune tax" which was previously levied on high earners.

"If something isn't working, we're not dumb, we'll change it," government spokesman Benjamin Griveaux said on RTL radio on Wednesday morning, saying the wealth tax would be evaluated between now and late next year.

Mr Macron, 40, made the issue one of his key campaign pledges ahead of his election in May 2017, arguing that punitive taxes on the wealthy discouraged job creation and led many entrepreneurs to leave France.

Mr Griveaux stressed that reinstating the ISF "is not on the table for now", but Equality Minister Marlene Schiappa said she would argue to bring it back unless the tax cut could be shown to be effective. 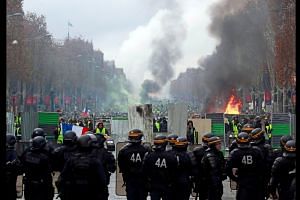 "The government has been too technocratic and took too long to respond" to the protests, she told France 3 television on Tuesday in a withering assessment of the management of the current political crisis.

On Tuesday, Prime Minister Edouard Philippe announced the first major U-turn of Mr Macron's presidency when he suspended for six months a rise in fuel taxes scheduled for Jan 1.

Mr Griveaux stressed that the tax hikes could be scrapped permanently if no agreement was reached during consultations over the next six months.

A source in the Prime Minister's office also told AFP that "the government has not necessarily played all of its cards", with further concessions such as a further cut in residence taxes possible.

Many "yellow vest" protesters, named after the high-visibility jackets they wear, have said that Mr Philippe's rollback on fuel taxes is not enough and have called for new protests in the capital on Saturday.

Two truck driver unions have also called an indefinite sympathy strike to begin on Sunday night, and the protests have spread to dozens of schools nationwide as students denounce tougher university entrance requirements.

Farmers will also consider later on Wednesday whether to mount a day of demonstrations and possibly road blockades next week, the head of the FNSEA agricultural union said.

Barricades at fuel depots are also causing shortages in some areas of France, while Paris businesses are bracing for new clashes which could erupt between protesters and police on Saturday.

Opposition leaders, including Mr Laurent Wauquiez of the right-wing Republicans, have called on the government to impose a state of emergency and to deploy army units to back up police.

Amid his domestic woes, Mr Macron also saw his "friend" US President Donald Trump weigh in on Twitter, saying protesters were disavowing Mr Macron's adherence to the 2015 Paris climate accord.

"The Paris Agreement is fatally flawed because it raises the price of energy for responsible countries while whitewashing some of the worst polluters... in the world," Mr Trump wrote.

Mr Trump also retweeted a false claim from American conservative student activist Charlie Kirk that said: "'We want Trump' being chanted through the streets of Paris'." Mr Macron's office said it had "no comment" on Mr Trump's tweets.