PARIS (AFP, REUTERS) - French riot police fought running battles with “yellow vest” protesters in the streets of Paris, in a third weekend of nationwide unrest against high living costs that pose one of the gravest challenges to Emmanuel Macron’s presidency.

In Paris, police said they had arrested more than 265 people while almost 100 were injured as protesters hurled projectiles at riot officers, burned cars and smashed shop fronts.

In some areas, groups of masked men roamed freely, smashing a police van with metal bars and setting trees alight.  Police fired stun grenades, tear gas and water cannon at protesters at the top of the Champs-Elysees boulevard and multiple sites across the city including Opera and Place de la Bastille.

More than a dozen metro stations were closed.  “We are in a state of insurrection, I’ve never seen anything like it,” Jeanne d’Hauteserre, the mayor of the 8th city district, near the Arc de Triomphe, told BFM TV.

The popular rebellion erupted out of nowhere on Nov 17 and spread quickly via social media, with protesters blocking roads across France and impeding access to shopping malls, factories and some fuel depots.

On Saturday (Dec 1), some targeted the Arc de Triomphe, chanting“Macron Resign” and scrawling on the facade of the towering 19th-century arch: “The yellow vests will triumph.”

Prime Minister Edouard Philippe expressed his disgust: “I am shocked by the attacks on the symbols of France. We are committed to dialogue, but also respect for the law.” Other protesters smashed the windows of shops including branches of Chanel, Apple Inc and Dior, where protesters daubed a wooden board “Merry Mayhem”. Security officials were locked inside the Interior Ministry for crisis talks for several hours during the afternoon.

The skirmishes in Paris broke out early on Saturday, amid concern that violent far-right and far-left groups were infiltrating the “gilets jaunes” (yellow vests) movement.

Police were tracking “violent radical groups” who were well-prepared and switching from one location to another, Deputy Interior Minister Laurent Nunez said.

On the facade of the towering 19th-century arch, protesters scrawled in big black letters: “The yellow vests will triumph.”

Some protesters were later seen on top of the arch.

Clashes also took place in other cities and towns including Nantes in the west, Toulouse and Tarbes in the southwest, Puy-en-Velay in the centre of the country, Charleville Mezieres in the northeast and Avignon in the southeast.

"With all these tax hikes, there's not much left for eating at the end of the month," a high school cook who gave his name as Philippe in the Essonne region outside Paris said near the Champs Elysees on Saturday.

The protests come a week after violent clashes on the avenue last Saturday (Nov 24), marked by burning barricades and vandalism which Mr Macron compared to "war scenes". 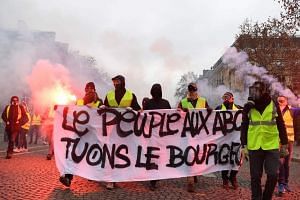 About 5,000 officers have been mobilised and were carrying out ID checks and searches for people hoping to reach the Champs Elysees.

"Our responsibility is to ensure that everything goes as well as possible," Interior Minister Christophe Castaner said earlier while touring the forces on the avenue.

Mr Castaner had already said on Thursday that "far left and far right activists" were preparing for fresh clashes with the police.

WE WANT OUR DIGNITY

The "yellow vest" movement erupted on social media in October and has since become a wider protest against Mr Macron, who is accused of failing to recognise the rising costs of living that has left many struggling.

The protests include many pensioners and has been most active in small urban and rural areas where it has blocked roads, closed motorway toll booths, and even walled up the entrance to tax offices.

Two people have died and hundreds have been injured in the protests which opinion polls suggest still attract the support of two out of three French people.

Attempts by the government to negotiate with the movement have failed, in large part because representatives have insisted on public talks broadcast on TV.

"We want our dignity back and we want to be able to live from our work, which is absolutely not the case today," Mr Jason Herbert said after walking out of talks with Prime Minister Philippe on Friday.

Mr Macron has sought to douse the anger by promising three months of nationwide talks on how best to transform France into a low-carbon economy without penalising the poor.

He also vowed to slow the rate of increase in fuel taxes if international oil prices rise too rapidly but only after a tax hike due in January.

But many protesters were unconvinced by Mr Macron's speech on Tuesday.

"What we need is something tangible, not just smoke and mirrors," said Mr Yoann Allard, a 30-year-old farmhand.

Trade union leaders, who met on Friday with Mr Philippe, have called for a moratorium on January's tax hike, a suggestion which some pro-Macron MPs have started to endorse.

The anger has reached French overseas territories, especially on the Indian Ocean island of Reunion.

The minister for overseas territories, Ms Annick Girardin, who was dispatched to the island to talk to protesters, was forced to cut short a meeting on Friday with demonstrators after they booed her and shouted "Macron, resign!"

The movement has spilled across to neighbouring Belgium, where riot police used water cannon on Friday to disperse stone-throwing "yellow vest" protesters who burned two police vehicles in the centre of Brussels.