HELSINKI (AFP) - The EU's diplomatic chief said on Thursday (Aug 29) that the bloc would support talks between the US and Teheran, but only if the current nuclear deal with Iran is preserved.

Teheran and Washington have been locked in a bitter stand-off since last year when US President Donald Trump unilaterally pulled out of the 2015 deal that gave Iran relief from sanctions in return for curbs on its atomic programme.

Tensions have risen dramatically in the Gulf, where Iran has seized tankers, but EU countries are reluctant to join a US-led operation to protect commercial shipping, floating instead their own observation mission.

The idea of direct talks between Washington and Teheran as a way out of the crisis has grown this week after Mr Trump mooted the idea and the new US defence secretary urged Iran's leaders to engage.

The EU has desperately sought to stop the deal from collapsing completely, arguing it is the best way to stop Iran developing nuclear bombs.

EU diplomatic chief Federica Mogherini gave a cautious welcome to the idea of negotiations, after Mr Trump said on Monday he was ready to meet Iran's President Hassan Rouhani within weeks. 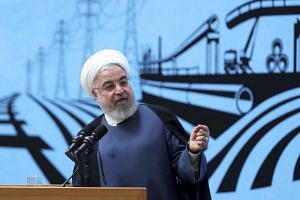 Iran's Rouhani says no talks with US unless sanctions lifted

EU officials say Iran breaches are still not major, can be reversed

But she added "first and foremost what is existing needs to be preserved" - specifically the 2015 deal known formally as the Joint Comprehensive Plan of Action or JCPOA.

"We will always advocate for the full respect by all sides of the UNSC resolutions and that includes the JCPOA," she said.

At the Group of Seven summit in Biarritz, Mr Trump showed openness to French President Emmanuel Macron's proposal of a summit with Rouhani.

US Defence Secretary Mark Esper followed up on Wednesday by urging Teheran to engage, but Iranian Foreign Minister Mohammad Javad Zarif insisted Washington must respect the deal and halt what he called "economic terrorism" against his country.

Maritime security and the Middle East are on the agenda for EU ministers meeting in Helsinki, but apart from Britain, there has been little European enthusiasm for Washington's Operation Sentinel in the Gulf.

Esper said the effort to protect shipping on crucial oil trade routes was now "up and running" with help from Britain, Australia and Bahrain.

French Defence Minister Florence Parly said that up to five countries had signed up for a potential EU observation mission.

"We must guarantee free navigation and security in the Strait of Hormuz, a vital region for the transport of hydrocarbons," she told AFP.

"But there is no question of creating an escort force - rather a dissuasive presence with an exchange of information."

France, which already has a warship in the region, is keen to avoid any perception that it is aligning itself to Trump's strategy of "maximum pressure" on Iran.

Iran has said that sending a "European fleet" to the Gulf would be a provocative move.

In response to the US pulling out of the deal and reimposing sanctions, Teheran has breached certain limits on its nuclear production imposed by the accord.

An EU official said the focus now was on ensuring these breaches do not become irreversible.

An Iranian delegation is expected in Paris next week and a meeting between senior Iranian and EU officials is planned soon.