TEHERAN (AFP, REUTERS) -  Iran on Sunday (July 28) slammed as “provocative” a British proposal for a European-led naval mission to escort tankers in the Gulf, amid soaring tensions over the seizure of ships.

“We heard that they intend to send a European fleet to the Persian Gulf, which naturally carries a hostile message, is provocative and will increase tensions,” government spokesman Ali Rabiei was quoted as saying by ISNA news agency.

Britain said on Monday it was planning a European-led force to escort tankers through the world’s busiest oil shipping lane in response to Iran’s seizure of a UK-flagged vessel on July 19.

The seizure of the Stena Impero came two weeks after British authorities detained an Iranian tanker – the Grace 1 – off its overseas territory Gibraltar on allegations it was breaching EU sanctions on Syria.

In his comments on Sunday, the government spokesman said Iran believed the security of the oil-rich Gulf had to be maintained by countries in the region.

“We are the biggest agent of maritime security in the Persian Gulf,” said Mr Rabiei.

Britain on Thursday ordered its navy to escort UK-flagged ships through the Strait of Hormuz, where the Stena Impero was seized by Iran’s Islamic Revolutionary Guard Corps.

But it has so far only received a cool response from the continent to its proposal for a multi-national escort fleet that would exclude the United States.

France said on Thursday it was not willing to send extra military assets to the Gulf, but would share information and coordinate its currently deployed assets. 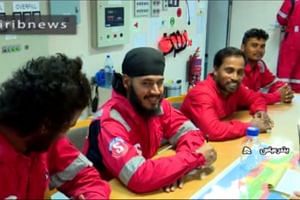 The US military has said it is already monitoring the strait, and that it is developing a “multinational maritime effort” dubbed Operation Sentinel to increase surveillance and security in key Middle East waterways.

The 33-kilometre-wide Strait of Hormuz provides the eastern entrance and exit point into the Gulf and runs between the United Arab Emirates and Iran.

Iran’s high-seas standoff with Britain comes amid rising hostilities between the Islamic republic and UK ally the United States.

The arch-enemies have been locked in a battle of nerves since President Donald Trump withdrew the US from a landmark 2015 deal aimed at limiting Iran’s nuclear programme and began reimposing sanctions.

The situation has worsened since the Trump administration began a campaign of “maximum pressure” against Iran this year, with drones downed and tankers mysteriously attacked in Gulf waters.

Parties to the 2015 deal held an emergency meeting on Sunday in response to the escalation in tensions between Iran and the West.

Iran’s senior nuclear negotiator Abbas Araqchi said after the talks in Vienna the atmosphere was "constructive", but there remained unresolved issues. "Discussions were good. I cannot say that we resolved everything, I can say there are lots of commitments,” Araqchi told Reuters.