ISTANBUL (REUTERS) - Turkish President Recep Tayyip Erdogan showed video footage at an election rally on Saturday (March 16) from an attack on two New Zealand mosques which killed 50 people and said the suspected gunman had made threats against Turkish Muslims.

The gunman shot dead 50 people and wounded more than 40 in Christchurch on Friday, broadcasting footage of the attack on one of the mosques on Facebook. He also posted a "manifesto" online, which was removed shortly after the attack.

Mr Erdogan said the suspect had twice visited Turkey and had warned that Turks have no place in Europe. He said Turkish authorities were investigating his visits and his contacts.

Mr Erdogan showed a video including extracts purportedly from the suspect's online manifesto and semi-blurred footage of the shooting to the crowd via a large screen.

"We do not want to see a cross and crescent conflict again," Mr Erdogan told the rally, referring to conflict between Christians and Muslims. He said the suspected gunman had said he wanted Turkish Muslims removed from Turkey's European territory.

Majority Muslim Turkey straddles Europe and Asia, its Asian section known as Anatolia. Turkey's largest city, Istanbul, is split between an Asian part to the east of the Bosphorus, and a European half to the west of the strait. 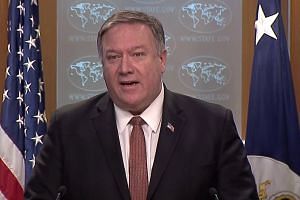 Societies have to face reality of rising Islamophobia: Shanmugam

"The wicked person who martyred 49 brothers and sisters is saying that we can stay on the Anatolian side, we cannot pass to the European side. Who do you think you are?" Mr Erdogan said.

A senior Turkish security source said Tarrant had entered Turkey twice in 2016 - for a week in March and for more than a month in September. Turkish authorities have begun investigating everything from hotel records to camera footage to try to ascertain the reason for his visits, the source said.

On Friday, Mr Erdogan said the suspected gunman had "targeted our country, our nation and myself", and said countries around the world, particularly in the West, needed to guard against the rise of Islamophobia.

Leaders around the world expressed sorrow and disgust at the attacks, with some deploring the demonisation of Muslims.

Political and Islamic leaders across Asia and the Middle East voiced concern over the targeting of Muslims.