ISTANBUL (WASHINGTON POST) - The memorial service for journalist Jamal Khashoggi was held in the shadow of the Saudi Consulate on Wednesday (Oct 2), on the first anniversary of his death, at the minute he walked through the consulate door, the last time that anyone who cared about him saw him alive.

A speaker, Mr David Hearst, asked for silence to mark the occasion. Then participants began to shout: for justice, for remembrance, for this death to resonate, on behalf of others whose deaths, disappearances or imprisonments had passed without notice.

The service started with Mr Khashoggi's own words, in a video broadcast on a screen behind the stage, voicing demands that were both routine and impossible.

"I am 60 years old," the Saudi journalist and Washington Post contributing columnist said in the recording. "I want to enjoy life, and I want to be free to speak for my country."

The country, Saudi Arabia, had no representatives on a dais that hosted a chorus of its critics. It would have been strange had any been invited.

Saudi government agents are accused of killing Mr Khashoggi on that Tuesday last year, of dismembering his body and of concealing the location of his remains.

The agents were dispatched by top Saudi officials, convinced that Mr Khashoggi's words, written in columns for The Washington Post, were a grave threat to the state.

The officials worked for Crown Prince Mohammed bin Salman, who was suspected of authorising the killing, according to the CIA and other intelligence agencies, but who has steadfastly denied it.

"Absolutely not," was Prince Mohammed's answer when asked recently whether he had ordered Mr Khashoggi's death.

None of Mr Khashoggi's Saudi relatives attended the service on Wednesday, either, including his children, but that, too, was expected. 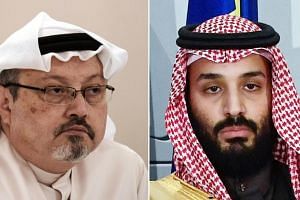 One year on, Saudi Arabia struggles to turn page on Khashoggi murder

Mr Khashoggi's killing aggravated arguments between Saudi Arabia and Turkey, and to travel to the Istanbul memorial was to take a side in that argument, something no Saudi citizen could afford to do.

A son, Mr Salah Khashoggi, who lives in the kingdom, warned in a Twitter post Monday that Saudi Arabia's "opponents and enemies" were exploiting his father's killing, and added that he had "absolute confidence" in the kingdom's judiciary to prosecute the killers.

With his immediate family absent, Mr Jamal Khashoggi's life and legacy were celebrated on Wednesday by friends, colleagues and supporters, including Arab political exiles, whose ranks he had reluctantly joined.

Among others in attendance were his fiancee, Ms Hatice Cengiz, who had paced outside the consulate, waiting fruitlessly for him to emerge; Mr Jeff Bezos, the owner of The Post; Mr Frederick Ryan Jr, the paper's publisher; and Ms Agnes Callamard, a United Nations human rights investigator who wrote a report that provided the most thorough accounting to date of Mr Khashoggi's death.

Ms Callamard's has been an unexpectedly loud voice in the year after Mr Khashoggi's death. With incessant demands for accountability, she has inserted herself into a conversation dominated by powerful governments, criticising all of them, including Saudi Arabia, the United States and Turkey, for their conduct.

"No one should get away with murder," she said on Wednesday, this time clearly focusing on the Saudi government and the crown prince, the kingdom's young leader. "No matter who they are or how high their station in life."

Like other speakers, she also addressed what she said was a threat to the global news media that Mr Khashoggi's death had laid bare.

The setting added resonance to Ms Callamard's plea. Turkey's government, which has vigorously demanded that Saudi Arabia account for Mr Khashoggi's death, is itself one of the most prolific jailers of journalists around the world, according to press freedom groups.

Soldiers watched from the rooftops as the sun baked those on the stage. One of them, Mr Turan Kislakci, called on the Saudi government to hand over the consulate, so it could be turned into a museum honouring Mr Khashoggi's life.

At the end of the ceremony, a small monument of white stone was unveiled in the garden in front of the consulate, bearing Mr Khashoggi's name, his birth date and Oct 2, 2018, the day he died.

For all the celebration of Mr Khashoggi's legacy, the service on Wednesday was also a tribute to Ms Cengiz, forced into the public spotlight as she grieved. It was she who had to respond to questions she could not answer after her fiance disappeared, and who was subjected to mockery on social media when Saudi loyalists tried to deny Mr Khashoggi's killing had occurred.

"No one should ever have to endure what you did," Mr Bezos said, in brief comments before embracing her.

Mr Ryan, The Post's publisher, also thanked Ms Cengiz, "whose time of great joy was transformed into a terrifying nightmare. You have searched unceasingly for answers".

The answers, held by secretive governments, have been hard to come by. A trial underway in Saudi Arabia is held behind closed doors. A CIA assessment of the killing has not been released. Audio recordings made by Turkey of the killing have been shared with a few people but not the public.

"Last year today, I was standing here," Ms Cengiz said on Wednesday. "I was a girl in love, waiting for my man to come out of the consulate. We wanted to go to dinner. We wanted to invite our friends to our wedding. Now after the worst year in my life, I stand here broken but proud - proud to see you all here."

A drone hovered. Photographers crowded toward the stage.

"I still seek justice," she said. "I want to know what happened to his body. I want his friends to be released from jail. I want those in power to be held accountable for their actions."