In a fresh report, UN special rapporteur on extrajudicial, summary or arbitrary executions Agnes Callamard said she had "determined that there is credible evidence, warranting further investigation of high-level Saudi Officials' individual liability, including the Crown Prince's".

The report stressed that "no conclusion is made as to guilt. The only conclusion made is that there is credible evidence meriting further investigation, by a proper authority, as to whether the threshold of criminal responsibility has been met."

Ms Callamard said for instance that she had found evidence that "Khashoggi was himself fully aware of the powers held by the Crown Prince, and fearful of him".

Mr Khashoggi, a Washington Post contributor and critic of Saudi Crown Prince Mohammed bin Salman, was murdered at the Saudi consulate in Istanbul on Oct 2.

Riyadh initially said it had no knowledge of his fate, but later blamed the murder on rogue agents.

Saudi prosecutors have absolved the Crown Prince and said around two dozen people implicated in the murder are in custody, with death penalties sought against five men.

Ms Callamard has been conducting what she has described as "an independent human rights inquiry" into Mr Khashoggi's death.

UN special rapporteurs are also independent and do not speak for the world body.

In Wednesday's report, Ms Callamard said she found that the probes conducted so far by Saudi Arabia and Turkey had "failed to meet international standards regarding the investigation into unlawful deaths". 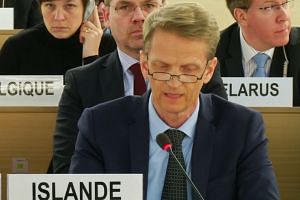 She urged UN Secretary-General Antonio Guterres to launch an official international criminal investigation into the case, which she said would make it possible to "build up strong files on each of the alleged perpetrators and identify mechanisms for formal accountability, such as an ad hoc or hybrid tribunal".

For her investigation, Ms Callamard said that, among other things, she had viewed CCTV footage from inside the consulate of the killing itself.

The report identified by name the 15 people she said were part of the mission to kill Mr Khashoggi, and suggested that many of them were not on the list of 11 unnamed suspects facing a closed-door trial over the murder.

Wednesday's report also found that there was evidence that "Saudi Arabia deliberately used consular immunity to stall Turkey's investigations until the crime scene could be thoroughly cleaned".

"In view of my concerns regarding the fairness of the trial of the 11 suspects in Saudi Arabia, I call for the suspension of the trial," she said in the report.