TOKYO (BLOOMBERG) - German Chancellor Angela Merkel and Japanese Prime Minister Shinzo Abe said they want to head off a no-deal Brexit that could rattle their economies, as both braced against the UK’s increasingly chaotic course towards an exit from the EU.

Abe and Merkel, both 64, are two of the most outspoken defenders of the international order being shaken by Brexit and the US-China trade war, as well as President Donald Trump’s questioning of decades-old alliances.

Their summit in Tokyo on Monday (Feb 4) came days after a Japan-European Union trade agreement came into effect, removing almost all tariffs.

“I conveyed to Chancellor Merkel our strong expectations that a no-deal Brexit will be avoided,” Abe told reporters after the talks.

“Japan wants the effect on Japanese companies, and on the economy, to be kept to a minimum.”

Merkel said she would do what she could to avoid a disruptive Brexit scenario.

She arrived in Japan hours after Nissan Motor announced it had scrapped a plan to build a sport-utility vehicle in the UK, amid uncertainty over the country’s future ties with the EU. 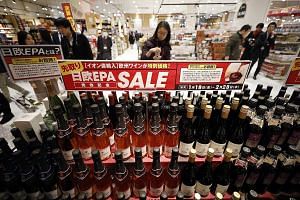 “We want to do everything to ensure that a no-deal doesn’t happen, because that would only heighten insecurity,” Merkel said.

“You have to be creative and listen to each other, such discussions can and must take place.”

The German leader brought with her a delegation of top executives from companies including Siemens and Bayer. She and Abe also announced at the news briefing a basic agreement on information security that would allow more defence cooperation.

Merkel called on EU leaders last month to shape the process of the UK’s separation from the Europe in a “responsible way.”

Initially an outspoken opponent of Brexit, Abe has more recently called for it to be done in a way that minimises the effect on Japanese businesses in the UK.

Some of Japan’s biggest brands including Nissan, tech conglomerate SoftBank Group and fashion brand Uniqlo use the UK as their foothold in Europe and are worried they could get caught in the crossfire.

In a speech at the World Economic Forum in Davos, Abe said trust in the international trade system must be rebuilt, and urged reform of the World Trade Organisation to keep it in line with global changes.

Japan and Germany – the world’s third and fourth largest economies – are both awaiting a Feb 17 deadline for the US Commerce Department to publish a report on the national security implications of auto imports that could justify tariffs on foreign cars.

As well as sharing concerns about trade, Japan and Germany have both come under fire from Trump for not spending enough on defense. Japan spends about one percent of gross domestic product on defence, while Germany spends about 1.2 per cent, according to World Bank data.