WASHINGTON/BEIJING (REUTERS) – United States President Donald Trump sounded optimistic about prospects for a trade deal with China on Tuesday (May 14) even as his administration readied 25 per cent tariffs on all remaining Chinese imports with no new talks scheduled.

In early-morning tweets, Mr Trump kept up his “America First” agenda in support of hefty tariffs and called on US companies to back him by shifting their businesses away from China. But he also softened his tone on soybeans and other agricultural products, appealing to Beijing to act.

“When the time is right, we will make a deal with China,” Mr Trump said. “It will all happen, and much faster than people think!”

“Hopefully, China will do us the honour of continuing to buy our great farm product, the best, but if not your country will be making up the difference,” he wrote in post addressing US farmers directly.

Mr Trump said on Monday that he expected to meet Chinese President Xi Jinping at a Group of 20 leaders summit in Japan in late June.

Based on an accelerated schedule laid out by the US Trade Representative’s (USTR) office late on Monday, Mr Trump will be in a position to launch 25 per cent tariffs on another US$300 billion (S$410 billion) worth of Chinese goods when he meets Mr Xi, adding potential leverage.

The USTR said it would hold a public hearing on the tariff list on June 17, with final comments due as little as seven days later. The list includes a wide range of consumer goods, from cellphones and computers to clothing and footwear, but it excludes pharmaceuticals, some speciality compounds and rare-earth minerals.

As negotiations toward resolving the US-China trade war stalled last week, Mr Trump escalated pressure by increasing tariffs last Friday to 25 per cent from 10 per cent on a previous US$200 billion list of Chinese imports.

China retaliated on Monday with higher tariffs on a revised list of US$60 billion worth of US products.

The prospect of the global economy being derailed by the US and China sliding into a fiercer, more protracted dispute has rattled investors and sparked a sharp sell-off on equities markets in the past week.

US stocks were slightly higher on Tuesday on Mr Trump’s more optimistic tone after a heavy sell-off on Monday. The Nasdaq was up 0.66 per cent, the S&P 500 up 0.4 per cent and the Dow Jones Industrials up 0.3 per cent.

In China, the Shanghai Composite Index lost 0.7 per cent and the blue chip CSI 300 fell 0.6 per cent on Tuesday. But both indexes rebounded from opening down 1 per cent, supported by suspected state-backed purchases.

However, the onshore yuan weakened 0.1 per cent to its lowest level since Dec 27, 2018, trading at 6.8874 per dollar, after China’s Foreign Ministry said it hoped the US does not “underestimate China’s determination and will to safeguard its interests”.

“My understanding is that China and the United States have agreed to continue pursuing relevant discussions. As for how they are pursued, I think that hinges upon further consultations between the two sides,” Chinese Foreign Ministry spokesman Geng Shuang told a daily news briefing, without giving details. 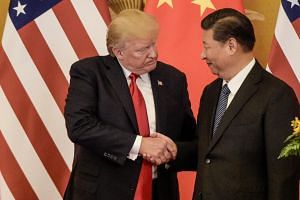 Sources have said talks stalled after China tried to delete commitments from a draft agreement that its laws would be changed to enact new policies on issues from intellectual property protection to forced technology transfers.

Mr Geng put the blame on Washington for going back on its word in some previous rounds of talks, including last May, when the two reached an agreement in Washington but then the US backed out a few days later.

“So you absolutely can’t put the hat on China of reversing positions and going back on one’s promises,” Mr Geng said, adding China had shown goodwill in the talks and kept its promises.

The ruling Communist Party’s official People’s Daily said in a commentary that the US needed to “give it a rest” with the complaints that it was losing out to China in the trade relationship because China was a hugely profitable market for US companies.

“US consumers, farmers, businesses and so on have become the victims of the trade frictions provoked by the United States. They are not victims of China’s ‘unfair competition’,” it said.