BEIJING (REUTERS) - China and the United States have made plans for face-to-face consultations over trade in January, the Chinese Commerce Ministry said on Thursday (Dec 27), as the world's two biggest economies advanced efforts to resolve a months-long trade war.

Consultations through "intensive" telephone calls will continue in the meantime, Gao Feng, spokesman for the Commerce Ministry, told reporters, adding that talks have been steadily moving forward despite the Christmas break in the United States.

"Even as the US side is in the Christmas holiday period, China and US economic and trade teams have been in close communication, and the consultations are progressing in an orderly manner as scheduled," Gao said, when asked about progress on trade negotiations.

Gao did not comment directly when asked to confirm a media report on a US trade delegation visit scheduled for the week of Jan 7.

"The two sides have indeed made specific arrangements for face-to-face consultations in January in addition to continuing intensive telephone consultations," he said, without elaborating.

US and Chinese officials have spoken by phone in recent weeks, but a meeting next month would be the first in-person talks since US President Donald Trump met his Chinese counterpart, Xi Jinping, in Buenos Aires on Dec 1.

Trump and Xi agreed to stop escalating tit-for-tat tariffs that have disrupted the flow of hundreds of billions of dollars of goods between the two nations. The two leaders also agreed to launch new talks while the United States delayed a planned Jan 1 tariff increase until March.

In response, China has resumed purchases of US soybeans for the first time in six months, even though hefty tariffs on US cargoes remain in place.

A US trade team will travel to Beijing the week of Jan 7 to hold talks with Chinese officials, Bloomberg reported on Wednesday, citing two people familiar with the matter.

A person familiar with the matter told Reuters last week that talks were likely in early January.

In yet another sign of reconciliation, China issued on Tuesday (Dec 25) a so-called "negative" list that specifies industries where investors - domestic or foreign - are either restricted or prohibited. 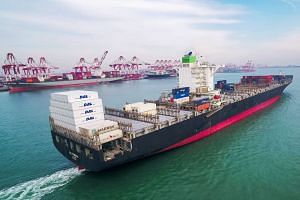 Doubts persist even as Beijing acts to meet Washington's demands

The unified list is seen as an effort to address concerns from Western investors that there is no level-playing field in China. Investment in key Chinese sectors, however, is still prohibited.

Gao said China would “comprehensively” remove all market access restrictions for foreign investors by the end of March, in areas not included in a foreign investment “negative” list published in June.

China has pledged to open its vast domestic market further to foreign investors and better protect their rights in the face of growing complaints and reduced foreign investment.

The commerce ministry is working on improving market access to foreign investors in the telecommunications, education, medical and culture sectors, Gao said, when asked about areas that could see curbs eased.

In particular, the equity cap on foreign investment in the education and medical sectors, which are of “great interest to foreign investors with a large gap in domestic supply”, would be relaxed, he said, without giving a timeline

On Wednesday, China unveiled the draft of a foreign investment law for public consultation. In it, China has proposed a ban on forced technology transfer and illegal government "interference" in foreign business operations, practices that have come under the spotlight during the trade war.

In an apparent move to emphasise reciprocity, the draft law said China would reserve the right to retaliate against countries that discriminate against Chinese investment with "corresponding measures".

The draft will likely go through several readings before being submitted to China's parliament for formal approval, which could take another year or more.

Heaping some uncertainty in the way of the bilateral trade talks was the recent arrest of the chief financial officer of Huawei Technologies Co in Canada at the request of the United States.

US prosecutors accuse Meng Wanzhou of misleading multinational banks about Iran-linked transactions, putting the banks at risk of violating US sanctions. Meng, who is the daughter of Huawei's founder, has said she is innocent.

Trump is also considering an executive order in the new year to declare a national emergency that would bar US companies from using telecommunications equipment made by Huawei and ZTE, three sources familiar with the situation told Reuters.

It would be the latest step by the Trump administration to cut Huawei Technologies and ZTE Corp, two of China's biggest network equipment companies, out of the US market.

The United States alleges that the two companies work at the behest of the Chinese government and that their equipment could be used to spy on Americans.