SINGAPORE - Electric vehicles are unpopular the world over, not only in Singapore - and the reason goes beyond cost, said The Straits Times senior transport correspondent Christopher Tan in a reply on Sunday (June 3) to Mr Elon Musk, chief executive of electric car maker Tesla.

"Their restricted range and limited product choice are two other main reasons," he said, a day after he penned an open letter refuting Mr Musk's comment that the Singapore Government is not supportive of electric cars.

Even Norway, which doles out the heaviest subsidies for electric vehicles, has proposed to pull back on tax incentives on electric cars weighing more than two tonnes, Mr Tan noted.

Mr Tan also said "Singapore is not exactly supportive of any car, regardless of their fuel type".

However, the country still recognises that electric cars are cleaner where they operate, which is why most of them will qualify for tax breaks of up to $20,000, he added.

Mr Tan was responding to Mr Musk's take on the former's open letter. The Tesla chief had earlier replied to an ST tweet, saying: "The results speak for themselves. Singapore is a very prosperous city and yet has very few electric cars.

"Why have policies that promote a combustion vehicle fleet in a dense city environment? In bumper to bumper traffic, each car's exhaust pipes releases poison gases right into the air intake of car behind. This is not healthy."

The results speak for themselves. Singapore is a very prosperous city and yet has very few electric cars.

The issue came under the spotlight after Mr Musk tweeted on May 26 that the Government was not supportive of electric cars.

He was responding to a Twitter user, who had asked him "do something to allow us in Singapore to get a Tesla".

After the tweets went viral, Mr Tan wrote an open letter to explain why Mr Musk could have been mistaken about Singapore.

Mr Tan said that Tesla electric cars belong to a premium segment of the market, beyond what most people can afford.

Tesla cars will also be taxed in the same way as powerful combustion engined-cars, as Singapore adopts a progressive road tax system calculated based on a car's engine displacement or power.

Beyond that, Singapore remains a small and densely populated country, where a high cost is placed on personal transportation.

In addition, most of the electricity generated in Singapore is from natural gas, which is fossil-based, and hence, non-renewable and not emission free. 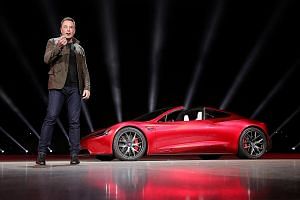 Please get off your high horse: Christopher Tan writes an open letter to Elon Musk

Charged up over electric vehicles

But other factors also come into play when determining how clean an electric car is, Mr Tan said.

Hence, it will be up to Tesla to make its electric cars more attractive for the Singapore market, he added.

Already, Singapore is among the few countries in the world with both an electric taxi fleet and an electric car-sharing scheme.

In January, HDT Singapore Taxi applied to add another 800 electric cars to its current fleet of 100, while BlueSG had rolled out its car-sharing scheme in December last year with 80 cars and 32 charging stations.

About 50 Volvo diesel-electric hybrid buses are expected to ply the roads in the second half of the year, as part of the Land Transport Authority's efforts to make public buses more environmentally friendly.