This is regarding your tweet on Monday about the Singapore Government not being supportive of electric vehicles.

What exactly did you mean by that? Would you care to elaborate, preferably on a medium which accommodates more than 280 characters?

What would you qualify as "supportive"? Grant Tesla special tax exemption?

Singapore already has a scheme that grants electric vehicles up to $20,000 in tax breaks. Plus, electric vehicle drivers will avoid more than $10,000 in petrol duty over 10 years.

I know this is minuscule in relation to the cost of a Tesla car, but that is because you have chosen to place your cars in the premium segment.

Even your latest Model 3 - supposedly a more affordable model - is beyond the budget of most non-millionaires after options are added.

And if you are referring to our road tax, it is a progressive system where rates are based on a car's engine displacement. Since electric cars do not have engines, the system uses a formula based on power, as a proxy.

Again, you have chosen to make Tesla cars powerful. Not a bad thing, really. But know that they will be taxed in the same way powerful combustion engined-cars are taxed. Don't expect special treatment.

It is one thing for governments to subsidise basic necessities such as education and public transport, but quite another for them to dole out rebates for the cocktail circles you are familiar with.

Cars are expensive in Singapore for a reason. We are a small city state, with one of the highest population densities in the world. So, we place a high cost on personal transportation, to reflect the externalities of driving. Whether a car is driven by petrol, electricity or nuclear power, it takes up precious space.

But you expect us to be "supportive" of electric cars. Well, a number of electric cars are already selling here - the BMW i3, Hyundai Ioniq Electric and Renault Zoe. More will arrive shortly, including those from Porsche and Jaguar.

You might also know that parallel importers have started selling Tesla models here, too. 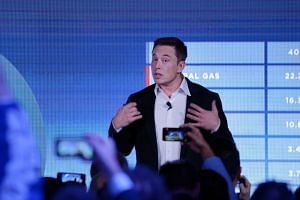 If you think Tesla is not viable without more government "support", you might want to start reviewing your product strategy. It is not the job of governments to help you sell more cars. It may surprise you, but it is, in fact, your job, Elon.

So, get off your high horse and get down to work. Make Tesla cars more affordable.

You also tweeted a global map of places which have Tesla Superchargers. Are you implying that you can't set up these fast chargers here?

Once again, Singapore is a small country. If your cars have a range of 400km as you claim, they will be able to traverse the island 10 times on a single charge. We don't need superchargers here. We have a growing network of electric vehicle charging points.

Don't get me wrong. I think what you are doing is admirable, shooting for Mars and all that.

And sure, electric vehicles are positive for the environment, but only to a degree. If the power used to charge them are derived from dirty sources, then that degree is smaller.

Most of the electricity generated in Singapore is from natural gas. It is a fairly clean fuel, but still fossil based. It is not renewable, and certainly not emission free.

There are many other factors which determine how clean an electric car is, including its manufacturing process, how much efficiency its batteries retain over time, how materials for its batteries are mined, how spent batteries are disposed of.

I am sure you know all that. So, please make a case for Tesla in this regard. It might be more productive than whining.