The taxi population has been shrinking due to stiff competition from ride-hailing services, but one cab company is looking to expand its fleet.

The firm is seeking to obtain a full Taxi Service Operator Licence (TSOL) from the regulator.

It was granted a temporary TSOL in 2016 with the rights to operate 100 cabs, as part of an eight-year government-supported trial to explore the feasibility of fleet-based electric vehicles in Singapore.

HDT managing director James Ng said: "Running a fully electric taxi fleet requires investments in building charging stations around the island to support operations, and scaling up to a fleet size of more than 400 taxis will generate sufficient revenue for the company to break even."

The LTA said it is currently assessing the firm's application.

While HDT's first 100 electric taxis are tax-exempt and classified as research vehicles - meaning that they do not have certificates of entitlement - the next 800 under the full TSOL will not enjoy these concessions.

Mr Ng, 45, does not think this will be a problem. He noted that electric taxis have lower life-cycle costs, while maintenance costs are about half those of petrol or diesel models, and the business is viable.

Though he would not go into details about funding, he said "various financial institutions are keen to provide loans and investment".

With more people opting for Uber and Grab private-hire car services, taxi numbers have been falling as operators find it harder to rent out their vehicles. 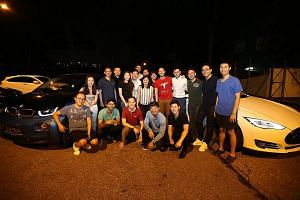 Charged up over electric vehicles 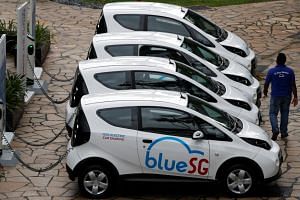 Mr Ng is confident that he can find the additional drivers because HDT offers a basic monthly salary plus bonuses for hitting revenue targets. All the other taxi companies charge daily rental rates.

HDT drivers get a starting monthly pay of $1,900, inclusive of Central Provident Fund (CPF) contributions. This can grow to a gross salary of $3,200 if a revenue target of $7,250 is reached.

National Taxi Association executive adviser Ang Hin Kee said of HDT's expansion plans: "HDT is the only operator with an employment model with a fixed wage, annual leave and CPF contributions. It is a useful model so that we can offer alternatives to our drivers."

However, not all are convinced by the employment model or the use of electric taxis, which have to be charged for a few hours each day.

HDT's current electric taxis, which are made by Shenzhen-based BYD, can run for 350km on a full charge, which takes two hours.

Said a 38-year-old taxi driver: "For cabbies, every minute on the road counts. The charging time is reasonable, but there must be enough charging stations at convenient locations."

As for the salary, the cabby, who gave his name only as Mr Lee, said: "The basic pay of $1,900 is comparable to other driving jobs, but whether we can hit the incentives in today's market is questionable."