Singapore and Malaysia have reached an agreement on recent air issues, paving the way for Malaysian carrier Firefly to resume its services to Singapore, more than four months after a suspension.

The Sunday Times understands that flights will resume in the week of April 22.

In a press statement yesterday, Transport Minister Khaw Boon Wan and his Malaysian counterpart Anthony Loke said that "in the spirit of bilateral cooperation", Singapore will withdraw the Instrument Landing System (ILS) procedures for Seletar Airport, and Malaysia will indefinitely suspend its permanent restricted area over Pasir Gudang.

With the agreement implemented by the civil aviation authorities of both countries last Friday, the two ministers said they looked forward to Firefly commencing flights to Seletar Airport this month.

An airline spokesman told The Sunday Times: "We are currently in active discussions with airports and both national regulatory bodies and will be announcing the details of the launch in due course."

The ministers noted that a high-level committee has been set up to review the Operational Letter of Agreement between Kuala Lumpur and Singapore Area Control Centres Concerning Singapore Arrivals, Departures and Overflights 1974.

But Malaysia has said it wants to reclaim the rights. 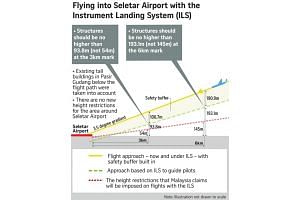 In their update on the air talks, the ministers said they "welcome these positive steps and look forward to further strengthening bilateral cooperation".

The disagreement over Seletar surfaced last November, when Firefly said it would not move from Changi Airport to the new Seletar Airport passenger terminal on Dec 1 - as earlier agreed to.

Malaysia's civil aviation regulator blocked the move, objecting to the introduction of an ILS at Seletar Airport that it claimed would restrict developments at nearby Pasir Gudang town.

The system, installed at many other airports, uses ground instruments to help air-traffic controllers guide pilots coming in for landing.

Without it, pilots rely on their vision, which means they cannot land in bad weather or when it is dark.

Countering Malaysia's objections, Singapore said repeatedly that the use of ILS at Seletar Airport does not change existing operations, including height limits.

Following the disagreement, Malaysia declared a restricted zone over Pasir Gudang for the purpose of military activities.

This affected the flight path for aircraft heading to and from Seletar, adding time and complexity.

On Jan 8, both countries agreed to simultaneously suspend for one month the ILS and the restricted area at Pasir Gudang. This was later extended till the end of last month.

Yesterday's statement comes ahead of a leaders' retreat between the two countries, postponed since last November. 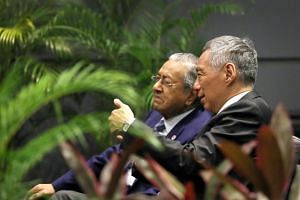 All 'unresolved' issues to be discussed with Singapore at leaders' retreat: PM Mahathir

When asked what issues would be discussed, Dr Mahathir said at a news conference in Malaysia last Friday: "All the things that are... unresolved, including the water problem... the border line with our waters... flights over our area, who is going to control it."

The two sides are also embroiled in a dispute over Singapore's territorial waters off Tuas, after Malaysia unilaterally extended the Johor Baru Port limits last October.

Singapore responded by extending its port limits within its territorial waters.

Last month, both sides agreed to de-escalate tensions by jointly suspending their overlapping port claims and reverting to their ports' former limits.