SINGAPORE - Two days after Malaysian carrier Firefly made a shocking announcement that it would suspend all flights to Singapore from Dec 1, the reason has emerged: It has not received approval from its regulator, the Civil Aviation Authority of Malaysia (CAAM), to move from Changi to Seletar Airport.

Firefly - a Malaysia Airlines subsidiary - had first agreed in 2014 that it would transfer all operations to a new passenger terminal to be built at Seletar to handle turboprob flights. In July 2018, it was decided the move would happen on Dec 1.

Shedding light on the latest developments, the Civil Aviation Authority of Singapore (CAAS) said in a statement on Saturday (Nov 24) that it is waiting for its Malaysia counterpart to clarify its concerns.

"CAAS has been requesting CAAM to inform us of their specific regulatory concerns affecting Firefly's safe operations into Seletar Airport."

Singapore awaits Malaysia's clarification of these concerns so that both parties can have a constructive dialogue, said a spokesman.

The Singapore authority also stressed that Firefly's move to Seletar has nothing to do with bilateral airspace issues.

CAAS was responding to media queries after CAAM said on Friday that to ensure safe Firefly operations, "there are indeed regulatory issues that need to be resolved between the civil aviation authority of both countries".

The Malaysian authority said it is "willing to work with Singapore on the regulatory issues related to Singapore's plan to move Firefly operations from Changi Airport to Seletar Airport, including outstanding airspace issues to be discussed, particularly on reviewing the terms and conditions of delegation of Malaysia's airspace to Singapore for the provision of Air Traffic Services".

In its statement, CAAS stressed: "Singapore had already conveyed to Malaysia that we stand ready to work with them on airspace issues in the interest of international civil aviation and bilateral cooperation.

"These are however not related to the shift of Firefly operations at Seletar Airport." 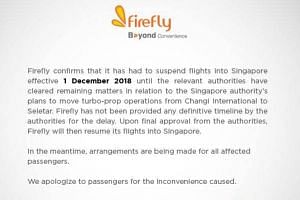 Firefly suspends all flights to Singapore from Dec 1

Providing a timeline of the developments, CAAS said that in 2014, it informed Malaysia's Ministry of Transport and Firefly of the planned relocation of turboprop flights - which Firefly operates - from Changi to Seletar.

As with any other relocation of an airline's operation, Changi Airport Group (which also runs Seletar Airport) subsequently consulted Firefly on the timeline for the shift, the authority added.

In July 2018, Changi Airport Group (CAG) officially informed the airline that its flights would be relocated to Seletar Airport on Dec 1. Firefly agreed.

"However, on Nov 14, 2018, Firefly informed CAG that it was unable to obtain approval from its regulator, CAAM, to operate into Seletar Airport," CAAS said.

Singapore has made all preparations and approved all applications by Firefly to operate its flights to/from Seletar Airport, the authority said.

It reiterated that the airport meets the relevant requirements of the International Civil Aviation Organisation on airport design and operations.

The new terminal at Seletar started operating on Nov 19 and is now handling chartered business flights and private jets.

Firefly, the only airline that currently operates turboprop flights to Singapore, offers 20 daily flights, to and from Subang, Ipoh and Kuantan.

Its decision to suspend flights to Singapore is expected to affect more than 12,000 people who have confirmed bookings on Firefly flights from Dec 1.