The Gojek driver involved in an investigation into a dispute which was recorded on video that went viral on the Internet will be allowed to drive - for now.

Speaking to The Straits Times yesterday, Mr Kamaruzzaman Abdul Latiff said the Land Transport Authority (LTA) has allowed him to continue to drive for the ride-hailing firm until "the decision is out".

He also said his interview with LTA went well and he would just wait for the latter's decision.

The 49-year-old driver was interviewed yesterday by an LTA official in relation to a Jan 29 dispute with a 25-year-old female passenger.

On Jan 31, he shared a seven-minute clip on the Go-Jek Singapore Community Facebook page, showing a heated exchange with the passenger.

He said she was upset that he could not avoid the Electronic Road Pricing (ERP) gantries during the journey.

Mr Kamaruzzaman said yesterday that he was asked during the interview what had happened before the recording, why he recorded the incident and posted the video online, and why he drove to the police station.

A spokesman for LTA said yesterday it has also requested to meet the passenger so that it can have a fuller picture of the incident.

ST reported earlier that LTA had sent a letter dated Feb 4 summoning Mr Kamaruzzaman to an interview yesterday as part of an investigation after complaints were filed against him.

LTA asked him to have his vocational licence and driving licence, as well as "the recording device, its recording and any other evidence". The letter also states that his attendance is compulsory under traffic rules.

A Gojek spokesman had said that the company is aware of the LTA investigations, with which it is cooperating "on an ongoing basis".

"It would not be appropriate to comment further at this stage," the spokesman added.

For now, neither Mr Kamaruzzaman nor the passenger, who wanted to be known only as Jovina, seems amenable to the idea of meeting to resolve the matter.

When asked yesterday if he would meet Ms Jovina, Mr Kamaruzzaman said he had "no answer" to the question.

"I am willing to forgive, but I don't think I can forget," he added.

When asked the same question, Ms Jovina said in an e-mail that "there was no misunderstanding to begin with to be cleared". 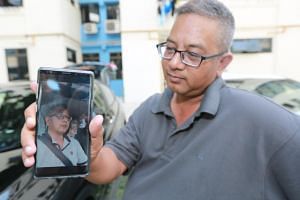 No need to shame Gojek passenger

"I told the driver my destination and told him I do not wish to take the more expensive route.

"We did not come to an agreement in Bishan and I asked him to return me to pick-up point or drop me at any safe spot but he refused to drop me off while we were still in Bishan. The rides that I have taken have always not incurred ERP cost."

She added that one such route ran from Bishan to 1 Coleman Street, via Thomson and Bugis.

In the video, which was taken using Mr Kamaruzzaman's mobile phone, Ms Jovina is heard saying "it is clear that you are out to cheat (my) money".

The car eventually comes to a stop in Lorong 4 Toa Payoh and Mr Kamaruzzaman is seen speaking to a Certis Cisco officer.

At one point in the video, the passenger screams, claiming that Mr Kamaruzzaman locked the car door on purpose and intended to kidnap her, noting later that he did not want to let her alight from the car when they could not settle their dispute.