SINGAPORE - The Gojek driver in a viral video has been summoned by the Land Transport Authority (LTA) for an interview as a part of investigations after a complaint was filed against him.

In a letter dated Monday (Feb 4) and titled "Notice To Attend Interview" seen by The Straits Times, Mr Kamaruzzaman Abdul Latiff is asked to attend an interview with an LTA official on Thursday morning.

"A complaint has been filed against you... The complaint concerns an incident dated Jan 29 at 7am. We are now investigating the matter," the letter states.

LTA asked Mr Kamaruzzaman to bring his NRIC, vocational licence, driving licence, as well as "the recording device, its recording and any other evidence".

The letter ends by stating that his attendance is compulsory under traffic rules.

Mr Kamaruzzaman, 49, told ST on Monday that he was in Malaysia taking time off from driving when his son sent him a photo of the letter.

He said he would go to the interview and may consult a lawyer.

Earlier on Monday morning, an LTA spokesman said: "LTA is looking into this incident."

LTA, in response to further queries, added: "To get a more comprehensive understanding of the matter, LTA will need to meet up with both the driver and the passenger to hear their respective accounts of the incident."

A Gojek spokesman said that the company is aware of LTA investigations, which it is cooperating with "on an ongoing basis".

"It would not be appropriate to comment further at this stage,” the spokesman added.

On Jan 31, Mr Kamaruzzaman had shared a seven-minute clip of a heated exchange with a passenger on the Go-Jek Singapore Community Facebook page, saying that the female passenger was upset that he could not avoid the Electronic Road Pricing (ERP) gantries during the journey. 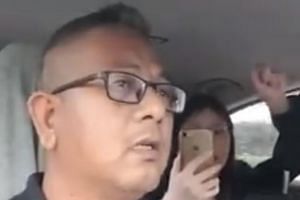 He had picked her up from Block 251 Bishan Street 22 at about 7am on Tuesday and was heading towards Coleman Street.

She then makes a phone call and an unknown person is heard over a mobile phone loudspeaker saying "you have no right to take her hostage" and "you are causing her to lose her freedom".

At one point, the passenger screams, claiming that Mr Kamaruzzaman had locked the car door on purpose and intended to kidnap her, noting later that he did not want to let her alight from the car when they could not settle their dispute.

He tries to explain to her that the car has auto-lock doors.

In a Skype interview with ST on Sunday night, the passenger, who wanted to be known only as Jovina, said she had not had the chance to make a police report as she left for Taiwan shortly after the incident, adding she is "thinking about it".

In an e-mail on Monday, Ms Jovina told ST that Gojek had not contacted her.

She did not say if she had filed a complaint with LTA.

ST has contacted Ms Jovina and LTA for more information.