SINGAPORE - A heated exchange between a Gojek driver and his passenger, who accused the former of kidnapping her on their trip from Bishan to the city, has gone viral after footage of the incident was posted on Facebook on Thursday (Jan 31).

A Gojek spokesman said a "fair outcome" had been reached, and it considered the matter concluded.

The Straits Times spoke to both driver and passenger separately.

Mr Kamaruzzaman Abdul Latiff, 49, had shared the seven-minute clip on the Go-Jek Singapore Community Facebook page, saying that the female passenger was upset that he could not avoid the Electronic Road Pricing (ERP) gantries during the journey.

He had picked her up from Block 251 Bishan Street 22 at about 7am on Tuesday and was heading towards Coleman Street.

"How to avoid ERP?" he wrote, adding that the passenger kept saying that he was trying to cheat her. Mr Kamaruzzaman said that he asked her if she knew of any routes to avoid the ERP gantries but the passenger was not able to direct him.

Speaking to ST on Friday, Mr Kamaruzzaman said the passenger started to get upset with him halfway through their trip on the Central Expressway (CTE).

When he explained to her that it was impossible to avoid the ERP gantries during the morning peak hour, she was not satisfied but also did not suggest her preferred route, he added.

Gojek's fares do not include ERP charges and drivers typically enter the extra charges incurred in the app before completing the trip.

She then makes a phone call and an unknown person is heard over a mobile phone loudspeaker saying "you have no right to take her hostage" and "you are causing her to lose her freedom".

At one point, the passenger screams, claiming that Mr Kamaruzzaman had locked the car door on purpose and intended to kidnap her, noting later that he did not want to let her alight from the car when they could not settle their dispute. He tries to explain to her that the car has auto-lock doors.

Mr Kamaruzzaman, who started driving with Gojek full time in December, told ST on Friday that the passenger later got off his car and left in a taxi. He said that he was not able to let her alight from the car earlier as they were on the expressway.

Also, "when she used the words 'hostage' and 'kidnap', I was scared as I knew these accusations are taken seriously in Singapore", he said, adding that was one reason why he wanted to to go to the police station to straighten things out.

"I knew that it was wrong to record a video of someone without their permission, but I had to do it to protect myself."

But in a Skype interview with ST on Sunday night, the passenger, who wanted to be known only as Jovina, said she had made her preference not to take the more expensive route clear once she got into the car.

"He didn't say if he was okay with that or not and continued to drive. I thought it would be better to clarify with him and told him again that I wouldn't want to go to the more expensive route,"the 25-year-old told ST.

She also clarified that the person she was speaking to on the phone was a "family member".

Ms Jovina, who is currently in Taiwan, told ST that when she and the driver did not come to an agreement, she asked to be returned to the pick-up point or dropped off at a safe spot.

"He refused to drop me off and he continued driving, and I didn't know where he was. I was very scared...I had repeatedly asked the driver but he refused to let me go," she said.

She did not provide her own video of the earlier part of the ride to ST, citing legal concerns. She also claimed that Mr Kamaruzzaman had only uploaded a portion of the video he had taken.

"It has been snipped," she said on Sunday, adding that the rest of his video would corroborate her account.

Jan, a woman who claimed to be Ms Jovina's mother, also spoke to ST saying that her daughter was probably too afraid to take much footage.

"She was alone in the car, and this man said she was taking her to some place she didn't know and wouldn't let her leave the car... she was frightened, anxious," the housewife in her 40s told ST.

Both Ms Jovina, who holds an administrative job, and Ms Jan claimed to be Singaporean.

Ms Jovina said she had not had the chance to make a police report as she left for Taiwan shortly after the incident, adding she is "thinking about it". 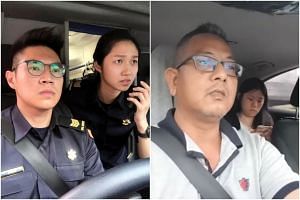 Mr Kamaruzzaman added that he shared the video on Facebook not to shame the passenger, but to simply let other Gojek drivers know that these misunderstandings can happen.

Mr Kamaruzzaman, who usually drives during the day, said that he has been "feeling troubled" since the incident, and has found it difficult to sleep at night.

"My heart does not feel at ease after this happened," he said, adding that he informed Gojek of the dispute and also made a police report on the same day.

He added that Gojek has told him that there was "nothing wrong" with what he did and that the company "won't do anything" to him.

A Gojek spokesman told ST that it has investigated the incident using the evidence provided and has spoken to Mr Kamaruzzaman and the passenger.

"Gojek takes all complaints from riders and driver-partners very seriously... A fair outcome has been reached with the driver partner and we are of the view that the matter is now concluded," the spokesman said.

The spokesman declined to reveal details of the "fair outcome".

In an e-mail on Monday, Ms Jovina told ST that Gojek had not contacted her.

Since the video was posted online, netizens have rallied in support of Mr Kamaruzzaman.

Facebook user Shafiqah Ramani wrote: "Cik Kamaruzzaman, I must say you (were) damn chill (and) professional during the incident."

When contacted on Monday, Mr Kamaruzzaman said he was in Malaysia taking some time off from driving.

"I think it's better to stop... I think I have said every thing," he added.