SINGAPORE - Members of the public have filed 270 reports against errant users of personal mobility devices (PMDs) and power-assisted bikes (PABs) in the month after a new in-app reporting function was introduced.

These reports have helped the Land Transport Authority (LTA) validate hot spots on its radar and also identify new areas for enforcement, the authority said on Tuesday (Sept 24).

The LTA introduced the Report PAB/ PMD function in its MyTransport.SG app on July 31, as part of efforts to improve enforcement actions against errant users. The app has about 700,000 users as of July.

It received 30 reports by 5pm on the first day the feature was introduced, and 270 reports by Aug 31.

One hot spot flagged by members of the public through the app was Pasir Ris Street 11.

In a Facebook post, LTA said: "Over the weekend, our active mobility enforcement officers were deployed along (Pasir Ris Street 11) and we detected a total of nine offences there.

"We also impounded an overweight PMD which clocked more than 47kg, way more than the permissible weight of 20kg."

There were 228 reported accidents involving PMDs on public paths in 2017 and 2018, with 196 of them resulting in injuries.

The safety issues surrounding the use of PMDs were back in the spotlight recently, after two high-profile accidents involving e-scooters. 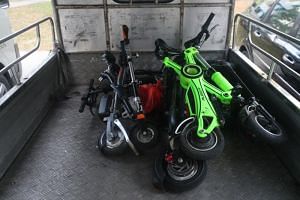 9 in 10 PMD users believe they are considerate but other road users disagree, survey finds

In the latest accident, a 65-year-old woman fell into a coma after her bicycle collided with an e-scooter in Bedok North last Saturday night. The woman suffered serious brain injury and fractures in her ribs and collar bone.

Her family has been told by doctors to be prepared for the worst.

In another case, a 53-year-old woman suffered a fractured skull and needed surgery after falling backwards when an e-scooter rider came close to colliding with her. The wound she suffered as a result required 30 stitches to close.

The Transport Ministry has announced a slew of initiatives as it seeks to improve safety around the use of PMDs.

LTA has committed to enlarging its enforcement team to about 200 members by the end of this year.

It has started deploying roving CCTV cameras at hot spots in areas such as Woodlands and Jurong West to help identify errant users.