SINGAPORE - For years, Madam Jasmine Yeo, the mother of the late national serviceman Dave Lee Han Xuan, often imagined what it would be like to give a speech at her son’s wedding – a few words for him “to remember me for life.”

“(Little) did I know I would be delivering Dave’s in this manner,” she said on Saturday afternoon (May 5).

In a packed service hall in Mandai Crematorium, attended by about 200 family members and friends, and 700 military personnel, Madam Yeo said her son’s death calls for reformation to the training regime.

“The definition of turnouts should be duly defined. Outdated traditional ‘tekan’ or punishment sessions should be put to an immediate stop. Heatstroke kills, so put all possible measures to counter it. It is not to be taken lightly,” she said.

Madam Yeo was referring to allegations made online about a turnout that Corporal First Class Lee was said to have gone through. However, this has not been officially confirmed by the authorities.

“If I have to sacrifice my only son to bring this message across, make sure it is one that brings forth solid changes to seemingly perfect training systems," she added.

CFC Lee, 19, died on Monday (April 30), close to two weeks after being admitted to Changi General Hospital for heatstroke. He later received a posthumous promotion from private to corporal first class.

Mindef said a Committee of Inquiry has been convened to look into his death, while police investigations are also ongoing.

On Saturday, Madam Yeo also urged commanders not to forget that “your mission is to train soldiers against enemies and most importantly for them to return home safe and sound to their loved ones.”

She told her son’s comrades not to “be sad after today”, but to assure their parents by ensuring their own safety during trainings, and texting their parents regularly. 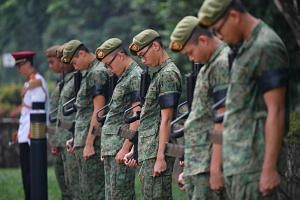 Together, they painted a picture of a loyal friend who was the life of the party, a hard worker always willing to lend a helping hand, and a soldier who could always be counted on to lift the spirits of others.

Major Poh said Dave struck him as someone who lived courageously, constantly strove to do his best and always had his friends’ backs – all marks of a good soldier.

But what had the greatest impact of all was CFC Lee’s strong sense of filial piety.

“Family was Dave’s centre of gravity,” he said.