The Straits Times News Tablet is a convenient way to keep up with the news, and value for money. These were among the top reasons subscribers collecting their devices at Plaza Singapura yesterday gave for taking up the offer.

The ST News Tablet is a new subscription deal that includes the ST e-paper as well as a Samsung Tab A 10.1-inch Wi-Fi tablet. The ST app is pre-loaded onto the tablet to maximise users' convenience.

It debuted to an overwhelming response, with over 2,000 people buying it on the first day of sales.

Yesterday, many were in the queue from as early as 10am.

Businessman Austin Ong, 39, said the ST News Tablet is convenient for him as he often travels overseas, which makes access to ST's print copy very difficult. "I'm an existing subscriber, but this just makes reading local news when I'm not in the country a lot easier," he said.

Housewife Sherrie Chew, who is in her 40s, decided to upgrade her Singapore Press Holdings (SPH) subscription plan to the ST News Tablet one to help save paper, but said she might miss the tactile sensation of having a copy of ST in her hands.

"I hope I will not get withdrawal symptoms. The ST News Tablet allows me to save and share articles more easily, as sometimes when I take photos of articles to send to my friends, it is quite hard to make sure the photos are of a good resolution," she said.

"I will just read the print paper in my condominium's lounge if I feel like I really need to touch the paper."

Mr Eric Ng, deputy head of SPH's circulation division, said the company is "greatly encouraged by the significant number of orders made on the very first day we launch this product".

He added: "This shows that there is an appetite for news among people, and we have to keep finding innovative methods such as the ST News Tablet to deliver our content."

Readers can buy new subscription plans online for an introductory price of $24.90 a month with a two-year contract at stsub.sg/tab.

At Plaza Singapura yesterday, several people had booked time slots to redeem their devices, but the overwhelming demand caused them to miss their appointments.

The long queues also meant some had to alter their plans.

Mr William Thompson, 72, had bought tickets to Ip Man 4: The Finale, but he had to miss the movie because of an unexpectedly long wait to redeem his device.

But the retired school principal, who still formulates questions for Workforce Skills Qualifications tests, said it was worthwhile.

"I have tried to put off going digital for the longest time, but I have come to realise it is an impossible struggle. I also decided to pay for the ST News Tablet because I want to read well-considered pieces in the opinion pages," he said.

For those who are still undecided, Samsung Experience booths have been set up at the redemption event this weekend for them to try out the tablets and find out more about the new package.

Mr Ng apologised for the longer-than-expected waiting times, and thanked buyers for their understanding and patience in putting up with the wait to get the tablets. 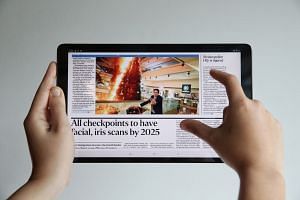 While the high traffic means walk-in redemptions will not be accepted at the redemption event this weekend, those who have not managed to secure an appointment online can make an appointment to collect their tablets after Christmas.

Early-bird customers who managed to register and have received their redemption e-mails can visit the redemption counters at Plaza Singapura's outdoor atrium from 10am to 10pm till Monday to redeem their tablets and tablet covers.

DJs from SPH radio stations Kiss92 FM and One FM 91.3 will also be at the event to give out freebies such as wrapping paper and candy canes.

SPH plans to release more tablets next month to meet the strong demand for the product.

Under a collaboration with Samsung, the app with the e-paper will be launched instantly when users turn on the tablet, avoiding the need for repeated logins. The tablet can also be used to download and access other apps and to surf the Internet.

Samsung Electronics Singapore president Eugene Goh said: "Technology is making unprecedented transformations to news consumption. Samsung is delighted to partner The Straits Times to bring the latest news to readers on our Samsung Galaxy Tab A where they want it and when they want it."