This comes even as the devices have been banned since September at the void decks and common corridors of Housing Board blocks under the 15 town councils run by the People's Action Party.

Management and security staff at the three condos - Bishan Point, Sky Habitat and H2O Residences - said that food delivery riders now have to leave their PMDs outside before entering the compound to deliver their orders.

At least for now, the moves – in place from between two weeks and three months ago at the different condos – are not expected to affect condo residents who own PMDs, nor their visitors.

Similar measures could be in place at other condos. A food delivery rider told Chinese-language evening paper Shin Min Daily News that of the condos he has delivered food to, 70 per cent of them do not allow riders to enter their compounds on PMDs.

Management staff at Bishan Point said that food delivery riders are required to keep their PMDs near the guardhouse when completing orders inside the condo.

Security staff at the condominium said the measure has been in place for about two months, after food delivery riders were found travelling at high speeds inside the compound.

Staff also alert PMD riders on the pavement to give way if there are cars entering or exiting the condo's premises.

A management staff member at H2O Residences said there is currently no ban on residents' use of PMDs and it had not come across instances of residents using PMDs inside the compound. 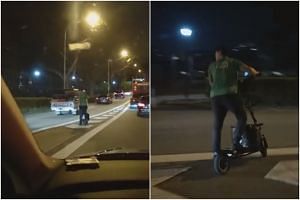 According to the staff member, food delivery riders who do not wish to leave their devices behind can call the residents through the condo's intercom service and ask them to collect their food order from the property's main gate.

Management at Sky Habitat condominium said that PMDs belonging to food delivery riders were also banned in the basement of the condo's carpark as there had been several close calls when cars entering the basement almost collided with PMD riders delivering food orders.

The condo's management said that while residents who own PMDs are not allowed to use them in the basement, they can use them elsewhere in the condo.

Residents are also advised to enter and exit the compound with their PMDs through a smaller gate reserved for pedestrians.

Sky Habitat residents The Straits Times spoke to said that food delivery riders had often gone to the condo's basement to deliver their orders in the past.

Resident Queenie Na, 37, said that PMD riders are not common inside the condo's compound but they can be found outside the gate, along the pavements and footpaths.

Agreeing with the condo's decision to ban the devices used by food delivery riders, the logistics executive added of PMD users in general: "They are often speeding along the pavements, and pose a risk to children and adults because they ride the devices at fast speeds."

Food delivery companies told ST that their riders who use PMDs are largely unaffected by the ban at condos.

Deliveroo said that it has not received feedback from riders about being unable to use their PMDs in the premises of some of the mentioned condos, but that it would "address their concerns accordingly" if it did.

The company said that riders of PMDs and power-assisted bicycles, also called electric bicycles, currently make up 5 per cent of its fleet of 6,000 riders.

Since Deliveroo was launched in 2015, these riders make up less than a tenth of its total number of riders. 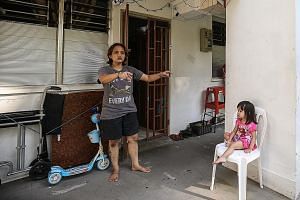 Real risk of PMD ban, but it will be difficult to enforce, say observers

"In light of the recent regulatory changes, we have stopped on-boarding new riders on PMDs," a company spokesman said. "All existing riders on PMDs are still riding with us, and should the total ban of PMDs be enforced, we will work closely with our riders on PMDs to help them comply with the latest rules and regulations."

Meanwhile, foodpanda managing director Luc Andreani said that the company does not expect a significant impact of any new PMD-related rules on its business.

Grab said that it regularly reminds its food delivery riders, including those who use PMDs, about safety measures, such as adhering to speed limits and wearing proper safety gear. They need to go through compulsory training too.

The condos' recent ban on food delivery PMDs comes amid a spotlight on the devices.

In the first month of a PMD and bicycle ban at HDB void decks and common areas, more than 300 people were caught in September.

There was also a spate of PMD-related accidents here. A 65-year-old woman who was seriously injured in an accident in Bedok involving her bicycle and an e-scooter died in hospital on Sept 25. The accident happened on a pavement next to a cycling path.

Early this month, Senior Minister of State for Transport Janil Puthucheary told Parliament the Government may ban PMDs if rider behaviour does not improve. He was expressing concern over the number of accidents involving PMDs that had risen with their increasing use.