SINGAPORE - Muslims here have to continue to harmoniously coexist with people of other faiths, urged religious leaders in Singapore on Friday (March 22) as they addressed last week's terrorist attacks at two mosques in Christchurch, New Zealand.

Calling the attacks, which killed 50 people, a "tragedy", these religious leaders or imams said in a Friday prayer sermon delivered in all 70 mosques here that the attacks were a reminder of the dangers of intolerance and hateful views.

"It is our duty as a Muslim ummah (community) to purify, preserve and protect our hearts and minds," said the sermon, which was prepared by Singapore's highest Islamic authority, the Islamic Religious Council of Singapore (Muis).

"It is our responsibility not to leave room for hatred and hostility towards those who are different from us. Let us continue our Singaporean tradition of peace and harmony."

As a result of the incident, New Zealand on Thursday announced an immediate ban on military-style semi-automatic and assault rifles.

In Christchurch on Friday, Prime Minister Jacinda Ardern joined about 5,000 people standing quietly at Hagley Park in front of the Al Noor Mosque, where most of the victims were killed, to mark one week since the mass shooting.

Two minutes of silence were observed after the Muslim call to prayer was broadcast nationally at 1.30pm (8.30am Singapore time).

The imams across Singapore condemned the attacker and his actions, noting that people like him are out to "demolish unity".

"They yearn for the spilling of blood and are intent on disrupting harmony among people of different races and religions. These people have no regard whatsoever for the sanctity of life, nor respect for places of worship or even religion," the sermon said.

But at the same time, the imams underscored the importance of forgiveness. They highlighted how the families of many of the victims have expressed forgiveness towards the individual who murdered their loved ones. 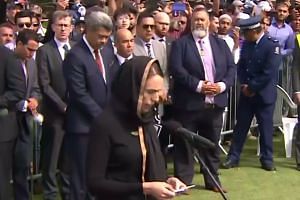 Calling this the epitome of unity and harmony, they said: "Extending forgiveness to those who have hurt us is far more powerful than any bullet, and mightier than any bomb. It is a force which enables us to remain calm and peaceful, even when our hearts are overcome with anguish and anger."

The imams also noted that all around the world, people of all faiths have been showing support to Muslims in the wake of the tragedy.

For instance, in Singapore, representatives from other faiths and New Zealand expatriates have visited mosques in an expression of unity.

"The tragedy in New Zealand has proved that those of us who value peace and harmony indeed possess the potential to overcome hatred and disharmony, and the strength to extinguish the flames of vengeance and anger," they said.

Religious Rehabilitation Group vice-chairman Mohamed Ali, who delivered the sermon at the Al-Huda Mosque in Bukit Timah, said the importance of harmony and unity needs to constantly be conveyed in Singapore.

Said Dr Mohamed, who is also an S. Rajaratnam School of International Studies expert in religious extremism: "Singapore is so small. We do not have natural resources here but we are rich in our unity, and in our ability to live with religious harmony.

"That message has been conveyed through the sermon today not only because of the tragedy in Christchurch, but also because it is something that needs to continuously be conveyed."