Prime Minister Jacinda Ardern announced the ban as part of sweeping changes to the nation's gun laws in the wake of last Friday's attacks on two mosques in Christchurch that left 50 people dead and dozens wounded.

At a press conference, she said the terror attack highlighted the weakness of the nation's gun laws.

“I am announcing that New Zealand will ban all military-style semi-automatic weapons. We will also ban all assault rifles,” Ms Ardern said, while announcing interim measures that will stop a rush of purchases before legislation on the measures takes effect.

She added that high-capacity magazines and devices similar to bump stocks – which make rifles fire faster – will also be banned.

“In short, every semi-automatic weapon used in the terrorist attack on Friday will be banned in this country,” she said.

For the guns that are still out there, Ms Ardern announced a buy-back scheme that will cost between NZ$100 million and NZ$200 million (S$92 million and S$185 million), depending on the number of weapons received. 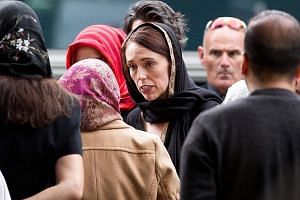 "(To) the current owners of the weapons we have moved to ban, I acknowledge that many of you will have acted within the law,” Ms Ardern said.

“In recognition of that and to incentivise their return, we will be establishing a buy-back scheme.”

Anyone who keeps the guns after an amnesty period will face fines of up to NZ$4,000 and three years in jail.

Ms Ardern brushed aside suggestions of opposition to the ban.

“The vast majority of New Zealanders will support this change. I feel incredibly confident of that,” she said.

The lone gunman who carried out last Friday's attacks was armed with semi-automatic rifles including an AR-15.

Australia banned semi-automatic weapons and launched a gun buy-back after the Port Arthur massacre in 1996 in which 35 people were gunned down. The AR-15 was used at Port Arthur. It has also been used in a number of high-profile United States mass shootings.

Ms Ardern said that similar to Australia, the new gun laws will allow for strictly enforced exemptions for farmers to conduct pest control and animal welfare.

Most farmers in the South Pacific country own guns, which they use for killing pests such as possums and rabbits, and for putting down injured stock.  The changes exclude two general classes of firearms which are commonly used for hunting, pest control, stock management on farms, and duck shooting.

Recreational hunting of deer, pigs and goats is also popular for sport and food, while gun clubs and shooting ranges dot the country.  That has created a powerful lobby which has thwarted previously attempts to tighten gun laws after other mass shootings in New Zealand and overseas.

Federated Farmers, which represents thousands of farmers, said it supported the change.

"This will not be popular among some of our members, but after a week of intense debate and careful consideration by our elected representatives and staff, we believe this is the only practicable solution,” Federated Farmers Rural Security spokesman Miles Anderson said in a statement.

“I have a military style weapon. But to be fair, I don’t really use it, I don’t really need it,” said Noel Womersley, who slaughters cattle for small farmers around Christchurch.

“So I’m quite happy to hand mine over, to be fair.”

Ardern said a further tranche of reforms will cover the firearm registry and licensing.