SINGAPORE - Several children who have been infected with Covid-19 have mild symptoms but none of them are seriously ill, said Education Minister Chan Chun Sing on Sunday (May 16).

Still, the situation is worrying because new strains of the coronavirus are much more virulent and seem to attack younger children, he added.

"This is an area of concern for all of us... The sharp rise in the number of community cases today requires us to significantly reduce our movements and interactions in the coming days. We are watching this very closely because we do not think it is a random thing that just happened in one day or so," he said at a press conference by the multi-ministry taskforce (MTF) on Covid-19.

However, Health Minister Ong Ye Kung said he had spoken to Prof Mak before the briefing, and added: "He did mention it would appear the B1617 strain appears to affect children more, so you'll notice that for schools, the response has been different compared with last year."

He said that the Ministry of Education (MOE) has acted quickly to get schools with pupils who had tested positive for Covid-19 to shift to home-based learning, and to test the entire school for the virus.

"That is also a precaution that has been put in recently, in view of (the) different behaviour of this strain of virus."

Several pupils have been testing positive for the coronavirus in recent days, with many linked to the cluster at the Learning Point tuition centre in Parkway Centre.

Five of them - two from Kong Hwa School, one from St Andrew's Junior School and two from St Stephen's School - had tested positive on May 13 after attending classes run by an infected private tutor at the centre.

Two pupils from St Andrew's, who took the same school bus as one of the five, tested positive on Saturday (May 15).

Another four pupils from the same centre - two from Kong Hwa, one from St Margaret's Primary and one from Yu Neng Primary - also tested positive on Saturday (May 15).

MOE putting in place best possible plans for children so that they are safe: Minister Chan Chun Sing

Another group of three pupils linked to the EduFirst Learning Centre in Hougang - two from Yio Chu Kang Primary and one from Palm View Primary - tested positive in recent days.

Mr Chan said: "To our knowledge, all the students who are either under quarantine or who have been confirmed to have contracted the virus, a few of them have mild symptoms but no one is seriously ill at this point in time.

"As to how this virus may affect the children differently from the other strains, I think that is best answered by the medical fraternity and we are certainly keeping a close watch on this."

The MOE announced on Saturday that these seven primary schools with pupils who tested positive for Covid-19 will shift to home-based learning from Monday (May 17).

On Sunday evening, MOE announced that students from all primary and secondary schools, junior colleges and Millennia Institute, as well as those from special education schools, will switch to home-based learning (HBL) from Wednesday.

However, schools will remain open to continue providing support to children and families who need it.

Mr Chan said that besides schools, there is also a risk of transmission in activities outside the classroom, so Singaporeans cannot afford to be complacent.

"As the nature of the virus continues to evolve, we must never make the wrong assumption that the characteristics remain unchanged for the different strains of the virus." 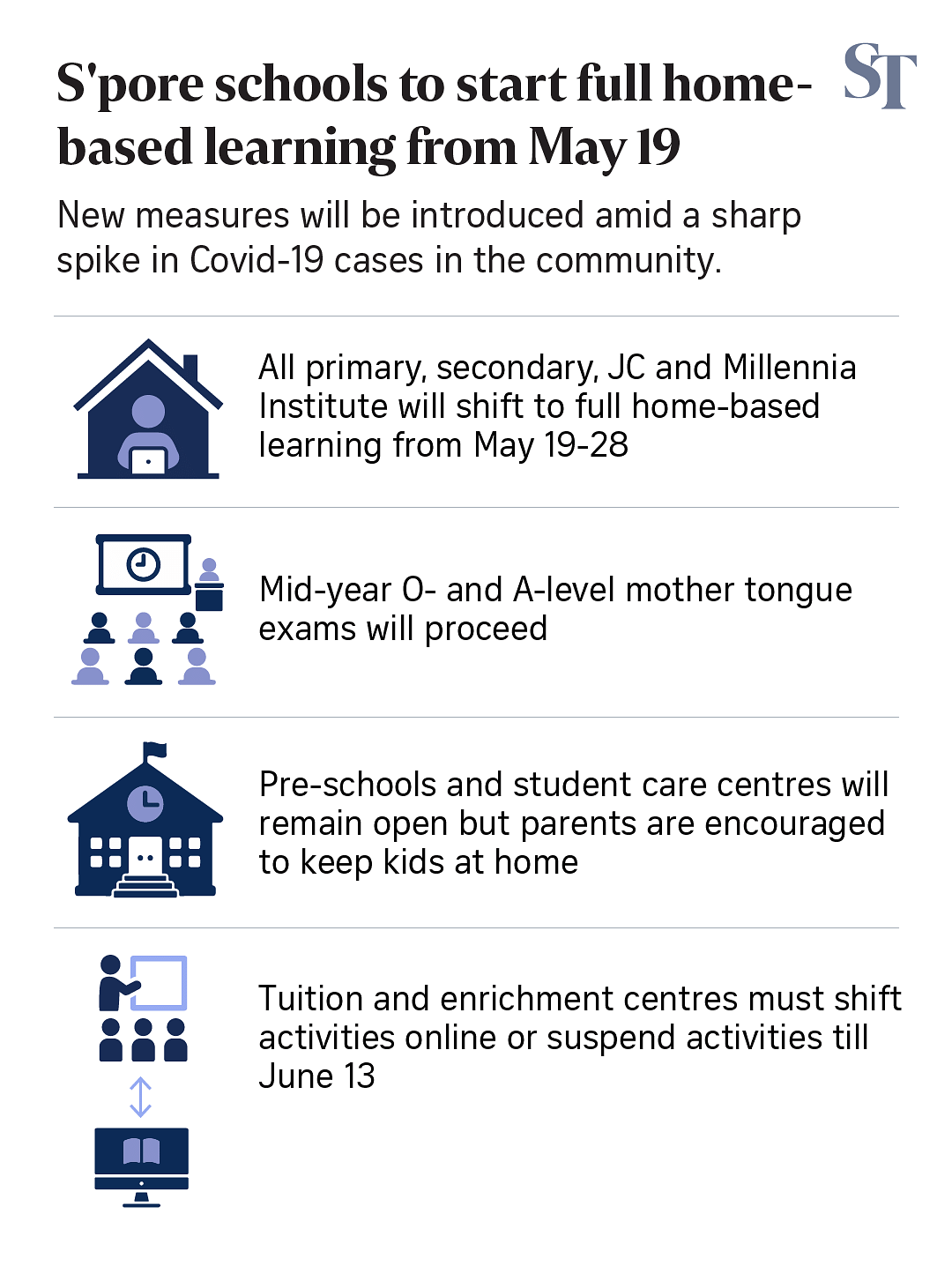