SINGAPORE - A new Covid-19 cluster of 13 cases at Block 506 Hougang Avenue 8 was announced by the Ministry of Health (MOH) on Thursday (June 3).

Twelve previously confirmed cases have been linked to this cluster. One new case, a 58-year-old housewife, was among the 35 cases in the community reported on Thursday.

The new cluster in Hougang Avenue 8 includes a sub-cluster of four cases linked to a 67-year-old retiree who was confirmed to have the virus on May 26.

The cluster's earliest detected case was a 57-year-old unemployed woman who lives at the Hougang block, and was confirmed to have Covid-19 on May 15.

A special testing operation was carried out at the block on May 21 and 22 after the earlier cases were detected.

MOH said on Thursday that its continuous surveillance detected likely new Covid-19 transmission in the vicinity of Hougang Avenue 8.

Besides new cases, Covid-19 viral fragments were also detected in wastewater samples collected from some of these blocks, the ministry added.

"To ring-fence possible cases, mandatory polymerase chain reaction (PCR) testing will be conducted for all residents and visitors of Block 506 Hougang Avenue, as well as the staff of shops in neighbouring blocks, from Friday to Saturday between 9am and 4pm."

This mandatory testing is being carried out to detect cases who were still incubating the virus in the first round of testing and to prevent spread in the community.

In the event that a positive case is detected, MOH will isolate the case, identify all close contacts, test and quarantine them to protect the community from further transmission. 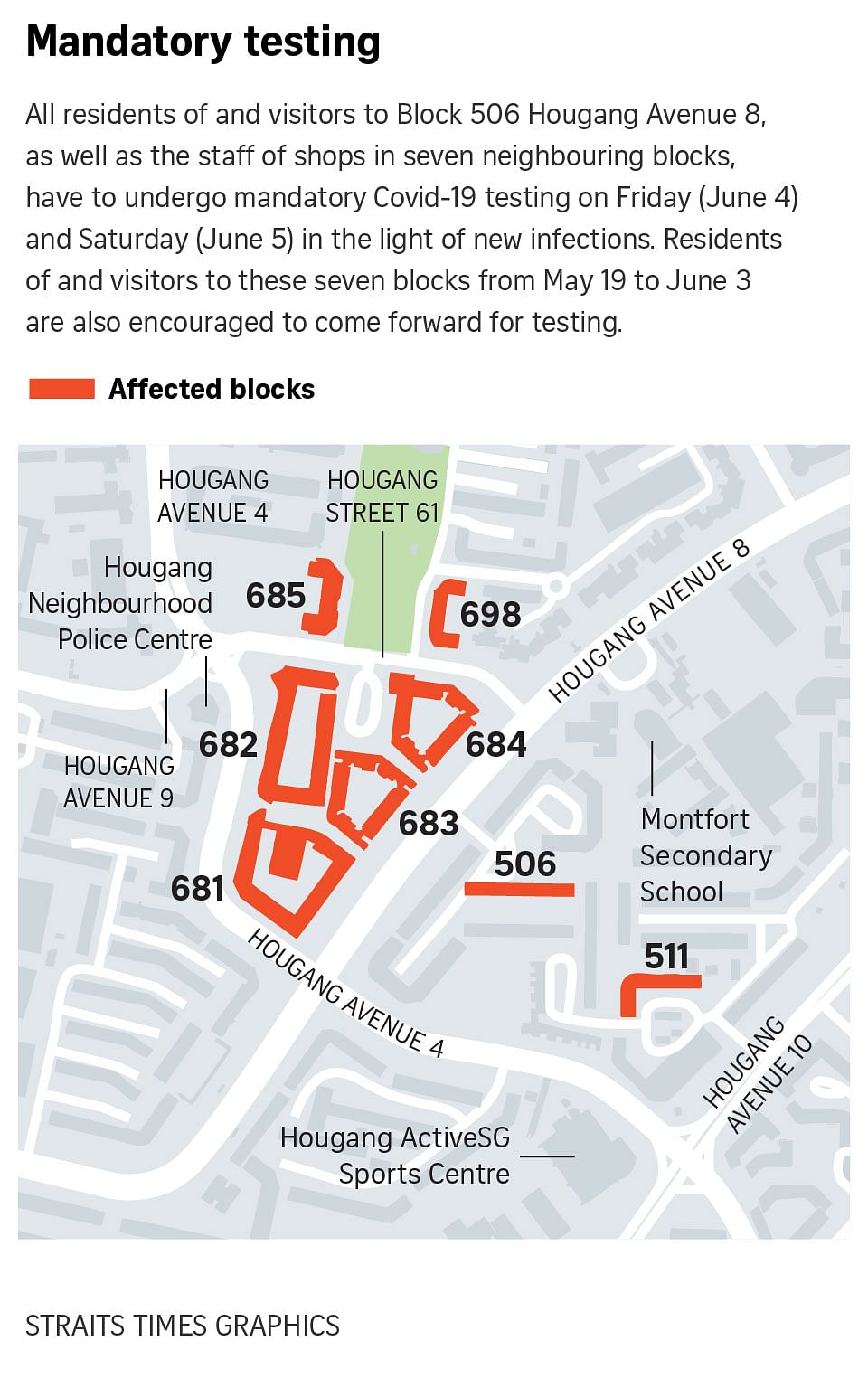 Voluntary PCR testing will also be conducted for residents and visitors of the seven neighbouring Housing Board blocks this month.

Residents and visitors from May 19 to Thursday of these blocks are also encouraged to come forward for testing.

Meanwhile, MOH has concluded mandatory PCR tests for 828 residents and visitors of Blocks 501 and 507 Hougang Avenue 8.

As at 8pm on Thursday, one person has tested positive, while 680 people have been found to be negative.

Twenty-two of Thursday's new community cases are from the MINDSville@Napiri cluster, which was first detected when a 37-year-old female resident tested positive for the virus on Monday.

The 19 residents and three nursing aides had already been quarantined prior to their positive test results. The staff and 17 residents have vaccinated.

They take the total number of people linked to the cluster to 27.

The sole unlinked community case on Thursday is a 41-year-old coating inspector with SBM Offshore at Keppel Shipyard's Tuas Yard.

He had previously travelled to India last July, and returned to Singapore on April 20.

Of the new community cases, 28 had already been placed on quarantine.

There were also 10 imported cases who had been placed on stay-home notice on arrival in Singapore.