The energy regulator will have more power to act in the event of a looming shortage or disruption to Singapore's gas supply, under changes to the law passed by Parliament yesterday.

The Energy Market Authority (EMA) can also direct the power grid operator and an electricity licensee to connect their electrical equipment, if deemed necessary, to expand the network or ensure the security and reliability of electricity supply to the public.

These are among the new measures to enhance the security, reliability and competitiveness of Singapore's gas and electricity sectors, Senior Parliamentary Secretary for Trade and Industry Tan Wu Meng said during the debate on amendments to the Gas and Electricity Acts.

The EMA can, for example, direct companies to take measures to address an imminent or actual severe shortage of gas, with approval from the Trade and Industry Minister. The measures include reallocating gas from users who can use alternative fuels to those with no alternative fuel supplies, and entering into, modifying or terminating contractual agreements.

Dr Tan said Singapore's reliance on imported natural gas has grown, with more than 95 per cent of the country's electricity stemming from natural gas, up from 77 per cent in 2010. Thus, "any gas supply emergency can adversely impact our economy".

Providing the EMA with broader powers will give it the flexibility to react to the wide range of potential threats that may emerge, he said.

Such orders will be issued only after alternative solutions have been explored, and parties may seek compensation for losses or damage suffered as a result of complying, Dr Tan added. 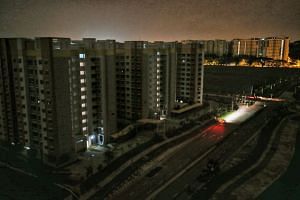 Other amendments to the Gas and Electricity Acts include broadening the EMA's functions to include dealing with health dangers that arise from importing gas, as well as imposing additional fines for the dishonest consumption of gas and electricity, and meter tampering.

The Electricity Act also states that consumers whose average monthly consumption of electricity in the preceding 12-month period is less than four megawatt hours can choose to continue buying electricity at SP Group's regulated tariff. They need not get it from other electricity retailers or the wholesale electricity market.

The blackout, which affected about 146,500 residential and commercial customers across 19 areas in the early hours of Sept 18, highlighted "how centralised our operations are and the associated vulnerabilities", she added.

Ms Pereira called for the establishment of independent sources of electricity islandwide to be quickened to provide backup power for critical installations such as water pumps, elevators, and traffic and street lights. These may help to reduce accidents and ease hardships in the event of a prolonged outage, she said.

She also suggested that microgrids, which are small electricity networks that can operate independently, be tested in more areas and institutions beyond the Singapore Institute of Technology and Pulau Ubin.

Apart from offering extra energy security, they may also present an alternative in the event of a cyber attack on the national grid, she added.