Those born in 1949 or earlier, and got citizenship by 1996, eligible for scheme that covers healthcare subsidies

The beneficiaries of the Merdeka Generation Package will extend beyond the 500,000 Singaporeans born in the 1950s, Prime Minister Lee Hsien Loong said yesterday.

Besides these men and women whose resourcefulness, determination and sense of duty played a key role in shaping Singapore, some of those who did not qualify for the Pioneer Generation Package will also receive help for their healthcare needs, he said.

The Pioneer Generation Package, given out in 2014, was for Singaporeans born in 1949 or earlier and received their citizenship by 1986.

The latest move extends benefits to those who obtained citizenship up to a decade later. There are no available figures for how large this group is. They will join the Merdeka Generation - Singaporeans aged between 60 and 69 this year - who are eligible for the latest multibillion-dollar scheme

The package was first announced during PM Lee's National Day Rally speech last year, where he coined the term "Merdeka Generation" to refer to about 500,000 Singaporeans born in the 1950s.

The generation "lived through the battles and upheavals of the Merdeka struggle", accepting hardships and making sacrifices to help shape post-independence Singapore, he said then. 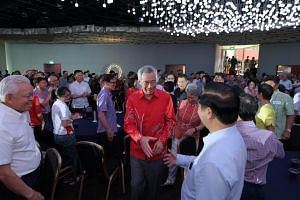 Merdeka Generation grew up together with the nation: PM

Honoured for 'can-do' spirit that helped in nation building

The men of the Merdeka generation were among the earliest batches to do national service, while many women had to cut short their education to support their families and siblings in the early years of independence.

This is because the later generation had more advantages in life in terms of education, lifetime earnings and Central Provident Fund savings, PM Lee had said last year.

He said yesterday, however, that the latest package would still be "substantial". Thanking them for their contributions, he said: "Our grandchildren enjoy educational opportunities beyond anything that our generation imagined.

"Our economy is more vibrant, our companies more prosperous, our jobs more fulfilling and rewarding, our social fabric is stronger... the Merdeka Generation played a big part in making all this happen."

He said members of the Merdeka Generation are now passing on the baton as Singapore faces new challenges, including keeping the economy competitive, preparing for an ageing population and maintaining social mobility.

More challenges will come, and Singaporeans cannot afford to take them lightly as success is never certain, warned PM Lee, who turns 67 on Feb 10 and is himself part of the Merdeka Generation.

"But neither have we any cause to be daunted, for as the Merdeka Generation has shown time and again, Singapore can and will come through, provided we pull together and tackle the challenges as one."

Passing down their life experience and survival values to future generations will do another great service to Singapore, he said.

"If future generations share your resourcefulness, determination and sense of duty - the Merdeka spirit - Singapore will continue to do well."

SEE TOP OF THE NEWS: Merdeka Generation grew up together with the nation: PM

A version of this article appeared in the print edition of The Sunday Times on February 03, 2019, with the headline 'Merdeka package to include some who missed Pioneer benefits'. Subscribe
Topics:
More
Whatsapp Linkedin FB Messenger Telegram Reddit WeChat Pinterest Print Purchase Article Copy permalink