SINGAPORE - Singaporeans born in 1949 or earlier who missed out on the Pioneer Generation Package but obtained citizenship by 1996 will qualify for the smaller Merdeka Generation Package to help them with their healthcare needs, Prime Minister Lee Hsien Loong announced on Saturday (Feb 2).

This group as well as Singaporeans aged between 60 and 69 this year will benefit from the multibillion-dollar package to help them with their medical expenses as they age into retirement.

The package was first announced in PM Lee's National Day Rally speech last year. He coined the term "Merdeka Generation" to refer to about 500,000 Singaporeans born in the 1950s.

The generation "lived through the battles and upheavals of the Merdeka struggle", accepting hardships and making sacrifices to help shape post-independence Singapore, he said then.

Like the $8 billion Pioneer Generation Package given in 2014 to those born in 1949 or earlier, the Merdeka Generation Package will cover subsidies for outpatient care, Medisave top-ups, MediShield Life premium subsidies and payouts for long-term care, though the benefits will be less.

Speaking at Gardens by the Bay's Flower Field Hall, PM Lee, who turns 67 on Feb 10 and is part of the Merdeka Generation, said Singaporeans of the generation have built good careers, provided for their families and lived full lives, and can look back with some satisfaction on what they have achieved together.

Singapore has transformed over the years, with the previously open sea now replaced with Marina Bay's open skyline and modern Housing Board flats a far cry from the "chap lau chu", or 10-storey flats in the first housing estates, and kampung houses without running water, he noted.

"Our grandchildren enjoy educational opportunities beyond anything that our generation imagined, our economy is more vibrant, our companies more prosperous, our jobs more fulfilling and rewarding, our social fabric is stronger... the Merdeka Generation played a big part in making all this happen," said PM Lee, who also spoke in Malay and Mandarin.

In retrospect, success in overcoming crises and problems may have seemed foreordained, but "in reality, this was not a superhero movie", he said.

With each crisis, they had to prove that they had the tenacity and unity to pull together and rise to the challenge.

From the early years of independence, when Singaporean Malays became a minority overnight and relatives found themselves divided by a political border, to the shock withdrawal of British troops barely two years later, they faced vulnerable moments.

"We risked being left exposed and vulnerable in a volatile and unstable region, but we gritted our teeth and served national service, built up the SAF quickly and kept Singapore safe," he said.

The men of the Merdeka generation were among the earliest batches to do national service, while many women had to cut short their education to support their families and siblings.

Other storms they weathered included the discovery of the Jemaah Islamiyah terrorist group’s plans of suicide attacks in Singapore, which threatened both security and racial harmony, and the SARS outbreak, when fear and anxiety gripped the nation.

There were also major economic challenges, from the 1973 oil crisis to Singapore's first major recession in 1985, which led to deep and painful cuts in employer CPF contributions.

These were defining moments for the Merdeka Generation, which faced the problems resolutely, worked with the Government and when necessary "accepted the bitter medicine that made us strong again", said PM Lee.

They did this understanding what was at stake, having lived through the upheavals of the independence struggle in the 1950s and early 1960s, and seen what their parents had gone through. 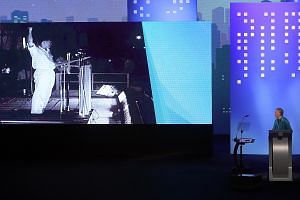 Now, members of the Merdeka Generation are passing on the baton as Singapore faces new challenges, including keeping the economy competitive, preparing for an ageing population and maintaining social mobility.

But "as the Merdeka Generation have shown time and again, Singapore can and will come through, provided we pull together and tackle the challenges as one", said the Prime Minister.

Passing down their life experience and survival values to future generations will do another great service to Singapore, he added.

"If future generations share your resourcefulness, determination and sense of duty - the Merdeka spirit - Singapore will continue to do well," he said.

They sang for the first time the Merdeka Sayang song, a riff on Mr Dick Lee’s 1989 remix of the Malay folk song Rasa Sayang.

The veteran singer-songwriter, who penned the lyrics, said he drew inspiration from his memories of growing up with black-and-white televisions and buses without air conditioning.

As a teen, “the most frustrating thing for me was having a voice as a musician, wanting to be heard and understood and trying to make Singapore music when the Singapore identity was not yet formed”, he said.

The song also emphasises that members of his generation are still active, with dreams to pursue, said Mr Lee.

“We’re getting tired of being regarded as oldies... we had energy then to build, and we have energy now to carry on.”

Those who want to learn more about the Merdeka Generation Package can visit https://www.merdekageneration.sg