Those in his generation grew up when Singapore became independent and lived through tumultuous times, he said at an event that paid tribute to those who helped build the nation.

PM Lee is among about half a million Singaporeans born in the 1950s, termed the Merdeka Generation.

"We were barely in our teens, but we could sense that the times were different, and we were about to experience a major change," he said at Gardens by the Bay's Flower Field Hall.

During those critical years, the People's Action Party won the General Election in 1959 and formed the Government for the first time.

Then in 1963 came the merger with Malaysia, followed by separation and "unexpected independence", said PM Lee, who spoke in Mandarin, Malay and English.

"We witnessed the violence on the streets during the communal riots, and were afraid for our lives and also of one another," he added.

"When Singapore declared its independence, while some were so excited that they set off firecrackers to mark the occasion, there were others who were sceptical if this tiny country could survive."

When Singapore declared its independence, while some were so excited that they set off firecrackers to mark the occasion, there were others who were sceptical if this tiny country could survive.

That experience shaped their generation's outlook and propelled them to make sacrifices for the country.

They have since built good careers, provided for their families and lived full lives, and can look back with some satisfaction on what they have achieved together, said PM Lee.

Singapore has transformed over the years, with the Marina Bay sitting on reclaimed land that was once the open sea.

Modern Housing Board flats are a far cry from the "chap lau chu" (10-storey) flats in the first housing estates and kampung houses without running water, he noted.

In retrospect, success in overcoming crises and problems may have seemed foreordained, but "in reality, this was not a superhero movie", PM Lee added.

With each crisis, the Merdeka Generation had to prove that it had the tenacity and unity to pull together and rise to the challenge.

Its members faced vulnerable moments, from the early years of independence, when Malay Singaporeans became a minority overnight and relatives found themselves divided by a political border, to the shock withdrawal of British troops barely two years later.

"We risked being left exposed and vulnerable in a volatile and unstable region, but we gritted our teeth and served national service, built up the SAF (Singapore Armed Forces) quickly and kept Singapore safe," PM Lee said. 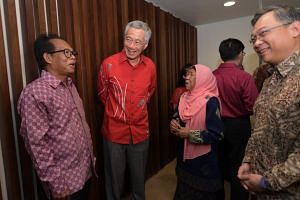 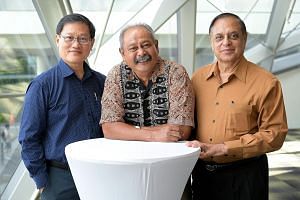 Honoured for 'can-do' spirit that helped in nation building

Other storms that were weathered included the discovery of the Jemaah Islamiah terrorist group's plans for suicide attacks in Singapore, which threatened security and racial harmony, and the severe acute respiratory syndrome outbreak, when fear and anxiety gripped the nation.

There were also major economic challenges, from the 1973 oil crisis to Singapore's first major recession in 1985, which led to deep and painful cuts in employer Central Provident Fund (CPF) contributions. A decade later came the Asian financial crisis, when neighbouring economies began to topple and more CPF cuts were needed, followed by the 2008 global financial crisis.

These were defining moments for the Merdeka Generation, which faced the problems resolutely, worked with the Government and, when necessary, "accepted the bitter medicine that made us strong again", said PM Lee.

They sang for the first time the Merdeka Sayang song, a riff on Dick Lee's 1989 remix of the Malay folk song Rasa Sayang.

The veteran singer-songwriter, who penned the lyrics, said that as a teenager, "the most frustrating thing for me was having a voice as a musician, wanting to be heard and understood, and trying to make Singapore music when the Singapore identity was not yet formed".

The song also emphasises that members of his generation are still active, with dreams to pursue, he added.

"We're getting tired of being regarded as oldies... we had energy then to build, and we have energy now to carry on."

A version of this article appeared in the print edition of The Sunday Times on February 03, 2019, with the headline 'Merdeka Generation grew up together with the nation: PM'. Subscribe
Topics:
More
Whatsapp Linkedin FB Messenger Telegram Reddit WeChat Pinterest Print Purchase Article Copy permalink