Raw fish dishes came under the spotlight in 2015 after a Group B Streptococcus (GBS) outbreak here involving about 360 cases. Of these, about 150 were linked to the consumption of Chinese-style raw fish dishes that use freshwater fish. Janice Tai caught up with two men whose lives were changed as a result of the infection.

Mr Tan Whee Boon once laughed bitterly at his predicament.

He wanted to kill himself but the former technician had no arms and legs to execute the plan.

After eating a raw fish dish in 2015, he come down with GBS infection that required his four limbs to be amputated. "I was so depressed when I realised I couldn't even kill myself, even if I wished to," said Mr Tan, 53, in Mandarin.

Two and a half years later, he is a changed man. Far from being suicidal, he is challenging his limits.

Last year, he tried scaling the massive rock-climbing wall at Kallang Wave Mall. Balancing his body weight on his arm cuffs and prosthetic legs, he inched his way up and managed to reach the halfway mark.

"I signed up for the activity organised by Tan Tock Seng Hospital for amputees to encourage others to do the same, because if a man with no arms or legs can climb, they can do it too," said Mr Tan.

He also learnt to scuba dive, though he did not go on to dive in the sea due to safety concerns.

"My dream is to skydive some day. I have been asking around to see which company will let me do it. I just find myself wanting to try or do things I have not done before," said Mr Tan, who is also in Singapore's first wheelchair rugby team.

He spends most of his time going to hospitals and homes to visit those who may be feeling down due to a newly acquired disability.

"Sometimes I don't even need to speak to comfort them. A lot of them are too embarrassed to be sad or angry about their own state when they compare themselves to me."

One patient paralysed on one side of his body after a stroke, for instance, stopped taking it out on his family when Mr Tan visited him in his hospital room.

Mr Tan's outlook on life changed when a former colleague took him to church, where he found God and peace and began to accept what had happened to him.

"I became less hot-tempered and irritable and came out of seclusion to meet people," said Mr Tan, whose wife works as a cashier. They have two teenaged children. 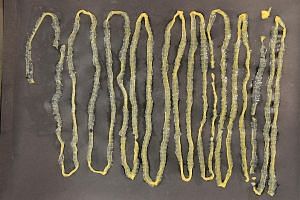 2.8m-long tapeworm found in Singapore patient who had no symptoms

For the past year, he has been trying to find a job through SPD, a charity for people with disabilities.

He has learnt to type using his arm cuffs but Mr Tan, who has secondary level qualifications, has not been called up for an interview yet.

The infection led to meningitis and an almost complete loss of hearing, a big challenge as Mr Sim enjoyed communicating with people, after almost three decades in sales and marketing. The infection meant he had to resign as industrial giant Honeywell's country manager.

Mr Sim then tried IT training courses to see if he was still able to learn despite being largely deaf. But he found it hard to follow the class despite having someone to help him take notes on what the trainer was saying in real time.

He uses messaging service WhatsApp and speech-to-text applications to communicate with his family. "My heart aches when I see them talk, laugh or smile at one another and I don't know the details of their conversations. I need to manage my emotions or else I can feel very left out among groups of people."

His wife also left her financial consulting job of 24 years to take care of him. The couple, who have three teenage children, are living on insurance payouts and their savings. But they are not bitter. Mrs Sim visited the raw fish porridge stall owners in 2016 to tell them how her husband was doing, to put their minds at ease. She has also written and published two books on their experiences. The English edition of From Raw Meal To Real Deal came out last year and sold about 800 copies. The Chinese version is being launched today at Cafe Galilee in Woodlands Regional Library.

Said Mr Sim: "I have lost my hearing, but I can still smell, see, feel and think."