SINGAPORE - National water agency PUB will be raising a 450m stretch of Dunearn Road, where flash floods have occurred three times this year, to reduce the risk of such incidents there.

The works are expected to be completed by November this year, PUB said in a statement on Saturday (Aug 28). Details on how high the road will be raised are still being fine-tuned.

The raising of the road will be an interim flood-proofing measure before ongoing drainage expansion works in the Bukit Timah area are completed by the first quarter of 2024.

PUB said that the drainage improvement project to widen and deepen a 900m section of the Bukit Timah Canal will help to address the problem.

On Tuesday, heavy rain caused a flash flood that resulted in the stretch of Dunearn Road between Sime Darby Centre and Binjai Park to become impassable for about 40 minutes.

That day, more rain pelted western Singapore in three hours than the average rainfall for the whole month of August. On July 12 and April 17 this year, heavy rain also caused flash flooding incidents there.

PUB said: "When completed, the upgraded canal will enhance flood protection for the surrounding area including Dunearn Road, and reduce the risk of flash floods occurring."

What brought the recent rains

The recent heavier-than-usual rains were caused by multiple weather events.

One of them is "a very active wet phase" of the Madden-Julian Oscillation, said the National Environment Agency's Meteorological Service Singapore (MSS).

This oscillation refers to a moving pulse of rain clouds that usually move eastwards over the Equator every 30 to 60 days, like a cyclist riding a bicycle across a stage. When the "cyclist" - or the band of rain clouds - makes an appearance in Singapore, the country experiences more rain.

At the same time, the effects of another climate phenomenon known as the Indian Ocean Dipole (IOD) are also being felt here.

The IOD is now in its negative phase, with changes in sea surface temperature and winds over the Indian Ocean bringing more rain over Singapore.

A spokesman for MSS said: "Apart from the influence of the negative phase of the IOD, the wet weather in the last few weeks can also be attributed to the passage of a very active wet phase of the Madden-Julian Oscillation over the equatorial region."

The current negative phase of the IOD is expected to persist till October, she added. 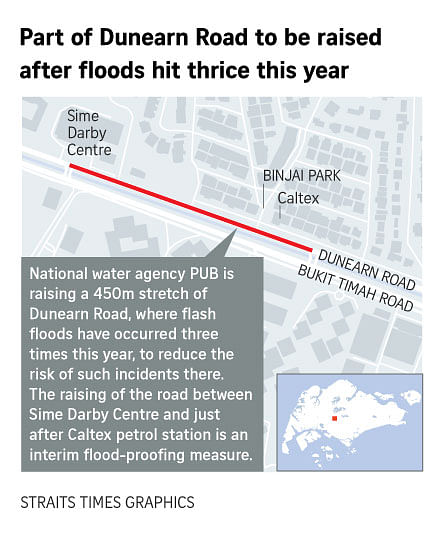 With more rain on the cards, some residents in flood-prone areas are taking steps to ensure they are not caught flat-footed again.

Mr George Lim, who lives in Eng Kong Place near the Sime Darby Centre, said his family has hired a contractor to build a ledge to prevent water from entering the house through its full-length window.

Mr Lim, who helps to run his family's carton box business, told The Straits Times that Tuesday's flooding incident was the most severe one experienced by the family.

"Previously, the water would only reach the car deck but this time, it entered the house," said the 27-year-old. "Our speakers were damaged. I touched the bottom of a speaker and got an electric shock, so now we don't dare to touch it."

Other residents said they were stuck in traffic and had to wade knee-deep in muddy water, while those at home during the downpour scrambled to save their furniture and shoes from being swept away.

S'pore could experience heavier rain over next 2 months

One Eng Kong Place resident, who wanted to be known only as Mrs Yeo, said her family's electronic devices, including a modem, were damaged as a result of the heavy rain.

The 52-year-old housewife, who has three children in their early 20s, said she rushed to the nearest M1 shop once the rain had subsided to get a replacement modem as her children needed an Internet connection to attend their online classes.

Although she did not have to pay for the new device as her previous one was under warranty, Mrs Yeo had to throw away her living room carpet, which she said cost thousands of dollars.

However, she is grateful that her car was not damaged.

"I was out that day. Some of my neighbours park their cars on higher ground when it rains as a preventive measure," she said.

Others like retired businesswoman Tan Koy Choo, 67, decided to make the best of the situation.

The avid gardener - who grows sunflowers, papayas and bananas in her backyard in Toh Tuck Drive - has collected about 30 15-litre containers of rainwater over the past week. She is using it to water her plants and clean her home, which she shares with nine other family members.

Bukit Timah residents told ST that PUB distributed self-inflating sandbags to them that can absorb water in the event of another flooding situation.

But some business owners said that by the time such damage control is taken, it is too late for some of their products.

Ms Lynne Chong, 52, who co-owns Perankan eatery Nonya Delicatessen in Bukit Timah Plaza, which was flooded on Tuesday, said the water damaged the flooring and merchandise of some shops.

Over at Sunset Drive in Clementi - where a flood risk warning was also issued by PUB on Tuesday - some residents feel that the road infrastructure needs to be improved to prevent a similar occurrence.

Mr Shahid Khan, 57, who runs the Early Years Montessori pre-school along Sunset Drive, said: "Remediating the slope of the road and better drainage would help alleviate these sorts of flash floods."

A portion of Sunset Drive was flooded during the downpour on Tuesday, but residents said they were not concerned as floodwater did not flow into their houses.

Mr Stewart Easton, 46, a resident at Sunset Drive for four years, said water from drains outside his home rose up the slope of his front yard, but did not enter his home.

A PUB spokesman told ST that its officers actively assist and give advice to building owners and residents on managing flood risks for properties located in flood-prone and low-lying areas.

This includes installing additional flood protection measures such as humps and permanent flood barriers to protect basement levels from floodwater, as well as alarm systems to provide early warning on flooding.

He added that PUB has successfully trialled various types of portable flood barriers and flood panels, which it lends to residents and business owners.

"They are taught how to quickly deploy these devices to keep out floodwater," he said.

'I was afraid to get trapped': Drivers flee flooded cars in Pasir Ris as water rises to their waists

askST: Is it safe to drive through a flood?