SINGAPORE - Impatient with the glacial pace of climate action, young people around the world plan to show the authorities this Friday (March 15) exactly how much they care by going on strike and skipping school.

There are also plans here for young people to push for greater climate action on that same day, said Ms Pamela Low from the Singapore Youth for Climate Action.

She added that details will be revealed at a later date.

The Straits Times understands there will not be a strike here.

Ms Low, a 23-year-old graduate, told The Straits Times: "With climate change undermining our future, knowing that better climate policy can arrest the trend has empowered us to make our voices heard."

Students from more than 80 nations, including South Korea and the United States, are planning to go on a school strike on March 15, skipping classes that day to urge the authorities to take more drastic climate action.

Singapore has stringent regulations on public protests under the Public Order Act. 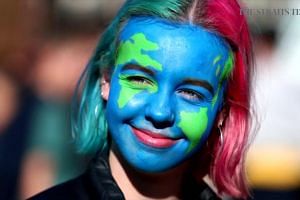 Mr Eric Bea, a fourth-year law student at the National University of Singapore (NUS) with an interest in international environment and climate law, said that in Singapore, civic culture is based on consensus and not conflict.

"It would be inappropriate to adopt the same kind of actions.

"This is why social media has become the primary, if not the sole, source of civic engagement here, as a modernised form of grassroots engagement," added Mr Bea, 24.

He said the global youth climate movement has been driven mainly by those in western countries.

"Recent actions should also be seen in that context - that the civil society culture is based on the competition of ideas. Strikes and protests are therefore part of that system," said Mr Bea.

The number of ground-up movements in Singapore urging greater climate action has grown significantly, with many of them being led by young people.

One such example is Ms Low's movement urging people to dine in instead of opting for take-outs, in a bid to reduce the amount of disposables being used.

There is also the Straw-Free Singapore movement, which was started by 17-year-old student Ang Zyn Yee to encourage individuals and businesses to give up single-use, disposable plastic straws.

Said Mr Bea: "But the message I am increasingly hearing is that we have almost exhausted what personal actions, pledges, and ground-up movements can do."

He said that Singapore can and must lead on climate action.

Doing so will allow Singapore to set an example for developing countries.

Mr Bea, who attended the United Nations climate change conference in Katowice, Poland, last December, said Singapore must "start planning for the gradual and orderly exit from the petrochemical and fossil fuel industry".

While he commended the carbon tax scheme, which will be rolled out in Singapore from this year, he said the tax rate has to ratchet up faster than whatever is currently planned.

In Singapore, an initial tax of $5 per tonne of greenhouse gas emissions will be levied on large emitters from this year to 2023.

Ms Low said that besides introducing a carbon tax, the people in Singapore and the Government can do more by reducing waste and ramping up renewable energy production.

For its part, the Government has invested heavily in solar energy research in Singapore.

Trials are being conducted to see how solar panels can be installed on reservoirs to help land-scarce Singapore tap more of the sun's energy.

On waste, the Ministry of the Environment and Water Resources has designated 2019 as the Year Towards Zero Waste, to raise awareness of waste issues in Singapore and to promote the 3Rs (Reduce, Reuse and Recycle).

Ms Low said there should be increased focus on the first R - reducing waste. This will help to improve management of the Republic's waste volume, she said.

Better efforts can also be made to scale up recycling rates.

Domestic recycling rates have remained dismal, with only 21 per cent of waste produced by the domestic sector being recycled in 2017.

Said Ms Low: "We are hopeful and committed about change. We still see hope, that's why we are fighting for it.

"Hence, we should put climate policy at the forefront."