To help firms adapt, tax kicking in next year will be low and reviewed later, says minister

Pricing carbon emissions first, and then adjusting the price later, is part of Singapore's strategy to meet its climate pledges without excessively burdening the industrial sector, said Minister for the Environment and Water Resources Masagos Zulkifli.

"We impose a low tax first, so companies will get used to the fact that there is going to be a tax, and this gives businesses more certainty," said Mr Masagos during a panel discussion on Tuesday on the role of carbon pricing in reducing emissions at COP24, the ongoing United Nations climate change talks in Katowice, Poland.

But the Singapore Government will review the carbon tax after five years, with plans to double or even treble it from the initial $5 a tonne of emissions, he said, adding: "If businesses don't manage to improve their efficiency, they will pay more tax. That's the signal that we gave to industries - that, whether they like it or not, we will impose this legislation."

Industry is the single largest source of emissions in Singapore, accounting for more than half of all greenhouse gas emissions.

The Singapore Government had in February announced that it would implement a carbon tax next year to reduce the Republic's emissions of heat-trapping greenhouse gases and to help it meet its climate targets under the 2015 Paris Agreement. 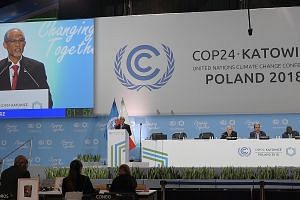 Climate deal likely, but some fear it will be watered down

Mr Masagos said that putting a price on carbon emissions is the right thing to do, considering the environmental damage that can be wrought to the earth's climate by such heat-trapping gases.

Speaking to a crowd of officials, non-governmental groups, business representatives and academics during the panel discussion, Mr Masagos shared how the Singapore Government had initially faced pushback from firms ahead of the implementation of the carbon tax.

"The (affected) emitters are largely (hydrocarbon) crackers, refineries and power generation companies, and they said the carbon tax will affect export prices, and make them less competitive, that they may leave the country, not put in new investments... But we had to make the right decision," he said.

The carbon tax is not Singapore's only strategy at dealing with its emissions, he added.

Singapore is also looking to reduce emissions in its transport sector by boosting public transport infrastructure and ensuring zero growth in private-vehicle fleet size, investing in energy-efficient buildings, and highlighting the importance of responsible production and consumption.

His comments come amid growing urgency among nations gathered at COP24 to come up with a road map that will allow the 2015 Paris Agreement to come into force by 2020.

Mr Masagos acknowledged that putting a price on carbon emissions was something individual countries had to decide on, with these decisions aided by global developments.

He added: "What we are going to decide in the next few days will shape this. If we do not have a clear, fair (set of) rules that will move the needle, then nobody will move. We will all just move on our own, and that won't be enough.

"It is important that in the next few days, the negotiators understand what is at stake, and make the correct decisions together... If we have a set of rules, we can build on them. But without any rules at all, nothing works."